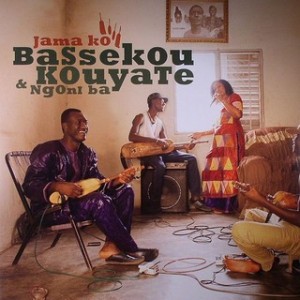 Already established as one of Malian music’s finest exports, Bassekou Kouyate and his outstanding band Ngoni Ba have made a bid for crossover success with this tremendous third album. The new line-up of Ngoni Ba features Kouyate’s sons Madou and Moustafa, as well as Abou Sissoko, another Ngoni master. Long term fans will be relieved to hear that the powerful vocals of Amy Sacko remain a dominant feature of the music. Employing producer Howard Bilerman, known more for his work with grandiose rock acts such as Arcade Fire, Kouyate has refocused and enhanced the band’s sound, producing wild, urgent and attacking music.

Any concerns that Bilerman might force some sort of fusion with western indie rock approaches are very quickly assuaged. Even though he has added some surprising musical collaborators (Mocky, perhaps best known for his work with Feist and Jamie Lidell, added organ and drums to some tracks), Bilerman is completely sensitive to the sound and vibe of the band.

The opening title track is as inspired, invigorating, infectious and impassioned a piece of music as is likely to be released this year. Jama Ko roughly translates as ‘big gathering of people’ and Bilerman has distilled and amplified that experience. Whilst the album should not be seen as a direct response to the volatile political situation in Mali (the recording sessions coincided with the coup), the curious mixture of anger and celebration in the music speaks of a particular defiance and resilience within Mali that now seems particularly topical.

It is not the only theme that resonates in a period of uncertainty and strife in Mali. Sinaly is about Sinaly Diarra, a Bamana king who resisted Islamisation in the 19th century. It manages to combine a lively pulse with delicate, thoughtful playing and offers a reminder that the Islam of Mali celebrates rather than condemns the art of music. Whilst this music lingers long in the mind at least in part for Kouyate’s fiery wah-wah enhanced solos, the amplification is handled carefully, never overwhelming the band’s natural sonic sensitivity. Tracks such as Madou, on which Amy Sacko sounds sublime, remain founded on distinctively Malian musical language, whilst Poye 2, an enjoyably loose and liberated collaboration with blues guitarist Taj Mahal draws the parallels between Segu music and American blues.

The blend is perhaps most effective on Dankou, with its repeating ostinato riff so characteristic of West African music, and a gritty, authoritative vocal from special guest Zoumana Tereta (who also features on two other tracks). Even at its most ceaselessly energetic and aggressive (the brilliant Ne Me Fatigue Pas), the articulate playing remains finessed, eloquent and precise.

Kouyate has made a bold move with this album, but it never sounds in any way calculated. Instead, it feels like a natural development from a gifted and restless musician. Whether directly inspired by political events or not, it certainly feels like a confident statement – a brilliant triumph in the face of real adversity.