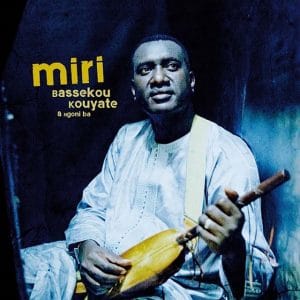 For his fifth album, Malian ngoni master Bassekou Kouyate has traded some of the amplified energy of Ba Power and the defiant, vibrant joy of Jama Ko for something more refined and reflective, powered both by tradition and by nuanced musicianship. Recorded at Kouyate’s own MBK studios in Bamako, the album emphasises values of love and friendship. Kouyate pays homage to two great Malian artists of particular importance to Kouyate (Zoumana Tereta and Kasse Mady Diabate) as well as addressing both political and personal themes.

While it certainly hints back at the sound of his earlier albums Segu Blue and I Speak Fula, Miri (the title means ‘dream’ or ‘contemplation’) is no nostalgic look back or revisionist volte-face. Instead, it also represents a progression in Kouyate’s artistry, given the depth of its vocal arrangements and the intricate lattice-like organisation of the relatively skeletal instrumentation. With Kouyate’s wife Amy Sacko and son Made Kouyate remaining key contributors, Ngoni Ba remains a family affair, this time further highlighting the role of the younger generation with Kouyate’s niece Kankou being a constant presence among the backing vocalists. In addition to this, there is an impressively substantial roster of special guest performers This is music that invites close attention and evokes strong emotions and sensations, including longstanding friends and musical colleagues such as Habib Koite, guest vocalists such as Afel Bocoum and western musicians such as Snarky Puppy’s Michael League (who contributes guitar to Konya).

This is an album rich in great storytelling, whether through words or music (most often both). The title track conjures a homely atmosphere of wistful nostalgia without words, as Kouyate reflects on his hometown of Garana, a place to which he still returns to break from the bustle of Bamako. The resplendent Wele Ni tells of a Segou king with such high regard for himself that he did not feel the need to respect his people. The lesson of the song is that rulers depend on the people around them for power. It has a lyrical, mournful quality, emboldened by lingering melodic lines. Elsewhere, the morals of the songs are delivered more stridently, such as on Konya, a wise but insistent guarding against jealousy with percussive, engaging accompaniment and some of the album’s most dazzling ngoni virtuosity.

The opening Kanougnon sets the scene perfectly, with a cycling mournful motif and a call and response vocal arrangement evoking a sense of both honour and desperation, the song telling a story of a man searching for a lost love who cannot be found. Kanto Kelena, which features Habib Koite, continues to develop some of these themes of romantic longing and melancholy, this time from the perspective of a man whose partner has left him. Like much of Kouyate’s music here, it has a reflective and mournful streak, with hints of blues, but also has a quiet energy and determination entirely in keeping with the celebratory qualities of Malian music. Again, there is some superbly articulate improvisation.

A similar quality informs the beautiful and striking closing piece Yakare, a homage to Kouyate’s mother. This is a song of quiet determination, poise and grace featuring one of Amy Sacko’s most strident and powerful vocal performances. Yakare also sums up this album’s thoughtful approach to arrangement. Whilst there is undoubtedly a strong rhythmic current to all this music, the percussion provides an underpinning texture, carefully absorbed within the overall effect of the music, rather than the driving force of a drum kit. This allows the ngoni players to adopt both a rhythmic and melodic role. Whilst Miri may not have the insistence and urgency of its most recent predecessors, it has a consistently high standard of musicianship and a depth, maturity, subtlety and insight that rewards repeated listening. It is a beautiful collection of music rooted in place, culture, history and ideas.