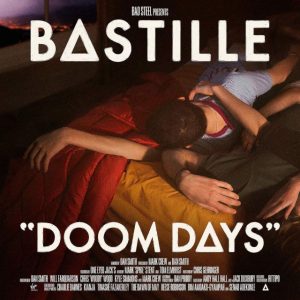 Music has long been used as a form of protest, and Bastille know this well. Dan Smith and co’s second album, Wild World, was released in 2016 to rave reviews – some calling it a cinematic, orchestral, acerbic take on the world.

Those making such comments about Will Wood might well jump at the title of its follow-up, Doom Days: here are two succinct words which surely describe the world at the moment. With governments in chaos, the climate crossing the line from saveable to oblivion and half the world firing guns at the other half, these seem like doom days indeed.

What we’d hope is that Bastille’s previously proven wordsmithery regarding the terror of our times in 2016 would make its way across to Doom Days, and show up the horror of our world in 2019. Unfortunately, instead of making such a statement, it is little other than nominative determinism. The Doom Days are here indeed, but for Bastille themselves, rather than the world they’re trying to talk about.

That’s not to say it’s bad. If you’re looking for a generic album filled with paint-by-numbers music designed to release wave upon wave of serotonin, then here it is. Put this on in the background at the gym, at the party when you’re in the MDMA-hugs part of the evening, or stick it on in your Uber whilst trying your hardest not to act drunk and fuck up your star rating. Then, no doubt, a transcendent experience beckons. Experience it with more than half a brain though, and you’ll end up in a lilac dress, tipping your perfectly teased lace-front to one side and saying… “meh”.

Described as a concept album about a “colourful” night at a party, as well as “the importance of escapism, hope and the preciousness of close friendships”, it starts well with Quarter Past Midnight, which channels the feeling of the night before that drunken Uber ride, with an exceptionally London vibe. Neon lights and partners in crime, awkward drums and the fast pace of the song remind us of heady, younger, unstable years. The following track Bad Decisions also concerns the chaos of the capital and a nostalgia for the bad decisions of the night, with synth clicks and hi-hats folding into honeycomb high vocals. 4am, too, is worth a mention – breaking the synthy mold of the rest of the album with ambient guitar and a sweet female-lead choir, it’s a love song to your friends – “Here here my family, you are my familiar, you are my familiar… I don’t care if we talk about the same thing again and again.” Great: we, as a society, need to talk more.

But mostly this is just a bit Bastille by numbers. If you’re looking for a photocopy of their previous albums, faded and off-colour, Doom Days will satisfy. A few lyrics that, isolated, even seem like philosophical statements. Take this from The Waves: “Oh what would your mother say if she could see what we were doing now” and “the air hit me on the way out – did it make me more drunk or make me more sober” could be poignantly beautiful as the highlights of a song, but thrown in the middle of a bunch of esoteric, ambiguous statements with any raw edge removed and they fall rather flat. This is music for guys who think that playing a piano in a field in Bristol will get their ex-girlfriend back.

The rest of us, who like music with an edge, indie-electro with some big dick energy, and coffee black and strong, are left wanting more. There is one saving grace: when a rave DJ inevitably gets hold of Doom Days and amps up the energy, the remixes are going to sound awesome. Till then… meh.