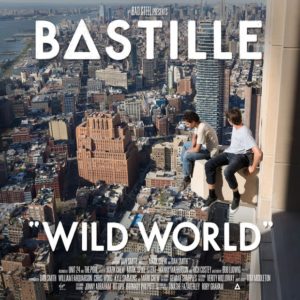 From a solo project formed in a bedroom in South London to global superstars, the tale of Bastille’s rise takes some beating. With the help of word of mouth – and then the addition of Chris Wood (drums), Will Farquarson (guitar) and Kyle Simmons (keyboards) – founder Dan Smith saw his sweeping anthems gradually takeover the radio one by one, as Pompeii, Flaws, Laura Palmer and Things We Lost In The Fire all made their mark.

While their debut Bad Blood was greeted with a mixed response from critics, the popularity of the band’s singles meant the record was already virtually assured of success – like a summer blockbuster that is simply too big to fail. It was certified double-platinum, named the biggest album of 2013 and earned Bastille the award for Best British Breakthrough act at the BRIT awards in 2014. Oh, and then there’s the case of two Grammy nominations.

Not ones to dwell on their remarkable list of early achievements, Smith and co. started work on the successor to Bad Blood while touring in 2014 – even finding time to release another of their signature mixtapes, Other People’s Heartache Pt III. However, attempting to follow-up an album that sold over four million copies is a daunting task, so it’s hardly surprising that it has taken three years for Bastille to materialise again.

Wild World is the end result of the four-piece’s endeavor and as was the case with its predecessor, it is nothing if not ambitious. “Our second album is about trying to make sense of the world around you, both as you see it and as it’s presented to you through the media,” explained Smith, ahead of release. As themes go, it is certainly appropriate in the current post-Brexit climate – and one the band approach with gusto.

Yet any fans concerned about a possible departure from the cinematic hits that they made their name with are gently eased in with lead single Good Grief, which is basically Bastille by numbers. “What’s gonna be left of the world if you’re not in it,” Smith sings on the chorus, as the song’s jaunty melody contrasts with its message about coping with loss. In many ways, it is a misleading introduction to an album that is far more adventurous.

What Good Grief does do, though, is establish the band’s move towards the more eclectic approach favoured on their mixtapes – as evidenced by the sampling of Kelly Le Brock from ‘80s movie Weird Science. The Currents is a far better example of Bastille’s intent on Wild World, with its distinctive, crunching synths a new addition to the band’s repertoire, as Smith sings: “Oh my god, I can’t quite believe my ears.”

It is one of several songs inspired by the concerns the frontman has about divisive political figures like Nigel Farage and Donald Trump. Warmth, which includes short news snippets, is another that captures the feeling of helplessness when watching world events unfold, while Four Walls is a sparse, faintly Frank Ocean-esque, electronic number that sees Smith pen a response to Truman Capote’s In Cold Blood.

While Wild World is still a Bastille album at heart – they definitely haven’t forgotten how to write a huge, sing-a-long chorus, as demonstrated by power pop ballads like An Act Of Kindness, Fake It and Glory – they have not played it safe, either. Send Them Off is Smith’s clearest nod towards the hip-hop genre he is so fond of, Blame includes the band’s first real use of big guitar hooks and Two Evils is a stripped-back and poignant three-minute beauty.

One of the accusations levelled at Bastille first time around was that Bad Blood was a bit bland, but the same cannot be said of Wild World. It may not provide incisive political commentary, but Smith does tackle some interesting questions – and manages to do so with the same infectious warmth and emotion that made the band a household name. Ultimately, Bastille’s second LP is a more than worthy follow-up, one that throws up a few interesting surprises along the way.