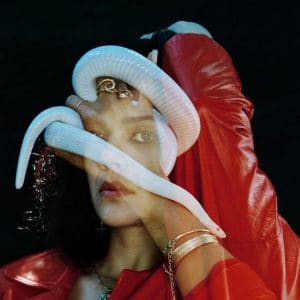 There’s a great deal of nostalgia for the ’80s kicking around right now. Indeed, the rebellious and carefree nature of the era is a welcome direct antithesis to the current troubled waters engulfing us. Lost Girls, the fifth album from Bat For Lashes, invites us to embark on a journey back to such incredible times where hair was enormous and John Hughes films were everywhere.

Following the ambitious and pitch-dark album The Bride, Natasha Khan turns to teen films of the ’80s for inspiration for this record. The songs were born from Khan writing a script for a film called The Lost Girls. With concept album prowess matched only by Kate Bush or Tori Amos, this is an exciting and ambitious creative project that does not disappoint.

The opener Kids In The Dark is an ambient synth-pop slice enticing us back to simpler times which makes for a lush and sweeping cinematic ode to the cool tribe in Stranger Things. By contrast, The Hunger begins rather sparsely before twisting into a divine and celestial synth-pop soundscape evoking both Martika‘s Toy Soldiers and Bananarama‘s Cruel Summer. The track has a supernatural feel that could form the backdrop for an edgy ’80s teen angst film with an unearthly undertone. Similarly, Vampires is a dark and sanguine instrumental track that treads down Elm Street on Fright Night.

The ’80s influences are scattered throughout the album, but feel fresh given Khan’s unique treatment and whimsical narrative. Jasmine is a glorious part Pet Shops Boys part Cocteau Twins hybrid, with its sultry spoken verses and hypnotic soaring chorus. So Good meanwhile evokes the early darkness of Shakespears Sister meeting Christine And The Queens, with its obscure bassline and deep vocals weaving into more uplifting electronica. And Peach Sky is experimental and seductive, almost like a deconstructed True Colours.

There is also a congenial ambiguity to this album. Feel For You is like nothing Khan has done before, a compelling and hypnotic banger with a brilliant nod to the Duran Duran/Nile Rodgers guitar riff in Notorious, whereas Desert Man is a classic Bat For Lashes enclave with haunting, sweeping and orchestral manoeuvres and bittersweet lyrics like “Your love is a nowhere land”. Safe Tonight has some shimmering synth dashes and possibly explores being drawn into a mysterious underworld where it is more secure than the normal world, while the album’s closer Mountains is a stunning slow-burner of an anthem, with trademark tender vocals building around layers of glorious synth-pop touches. This could be the soundtrack to the last five minutes of all ’80s rites of passage films.

Khan’s appeal lies in her deft ability to translate the alternative and unconventional into the leftfield mainstream, much like Moloko did with their epic album Statues or Siobhan Donaghy did with both of her solo works. Lost Girls is hardly uncharted territory, yet Khan manages to embolden it with her canny narrative, some truly beautiful sonic touches and her trademark gorgeous harmonies.