Bat For Lashes – The Haunted Man 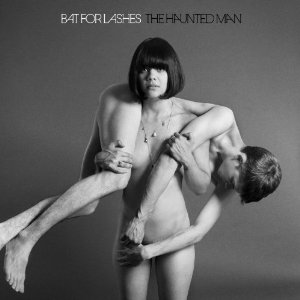 After releasing two albums to universal critical acclaim, it would be easy to struggle under the weight of expectation when taking on album number three. For Natasha Khan, a.k.a. Bat For Lashes, this was the welcome dilemma that she faced after her debut album Fur and Gold was certified silver and her second album, Two Suns, was nominated for the 2009 Mercury Prize. No pressure then. But Khan is not your typical recording artist and her return confirms as much.

The first thing that strikes you about the London singer-songwriter’s third album, entitled The Haunted Man, is the stunning cover art by photographer Ryan McGinley. The black and white shot sees Khan facing the camera naked with her modesty only covered by the trailing limbs of a naked man she’s carrying over her shoulders. Not only is it a startling and powerful image, but it instantly casts away the trademark hippy-ish visuals that normally adorn Bat For Lashes artwork.

The cover art also works as a perfect introduction to The Haunted Man, with the sparse sounds and Khan’s beautifully understated vocal on opening track Lilies capturing the same feelings of bare honesty. It’s a tantalising start to the album, one that builds towards a theatrical conclusion as the dramatic strings sweep over the bass synths. The lead track from the album, the heartbreakingly tender ode Laura, also succeeds in showing a vulnerability to Khan.

The simple combination of the piano and Khan’s engrossing vocals work perfectly on the track co-written with Justin Parker – the man partly behind Lana Del Rey’s Video Games – as she sings: “Laura you’re more than a superstar/ you’re the train that crashed my heart/ you’re the glitter in the dark.” Elsewhere, the strutting All Your Gold makes use of an infectious shuffling beat, while the throbbing synths and male backing vocals of the title track show Khan’s willingness to experiment with her sound.

Another album highlight is the mesmerising and emotive Winter Fields, which builds on swelling strings, an expansive synth layer and ominous drums. It demonstrates the intent of Khan to create an album that rests on the most basic of arrangements, while also experimenting with a fuller, more inclusive wall-of-sound. The ambition and fearless approach of Khan’s songwriting is unmistakably present throughout The Haunted Man and while there is nothing on the album quite as enchanting as the excellent Daniel from Two Suns, there is more than enough to show that she is not one to wilt under pressure.

The creative freedom that her recent success has afforded Khan has not gone to her head, either, with the progression from previous albums subtle, but noticeable. The Haunted Man is much cleaner and the production is nowhere near as murky as her first two LPs. For example, Marilyn features little instrumentation except for the swarming synths, allowing Khan’s threadbare – but poignant – vocals to attract the attention, as she delicately sings: “See your face at night, in forever light/ you’re a silver beam, place your boundary.” Then there’s the impressionable, stuttering beats of Horses Of The Sun, which lead towards a spine-tingling chorus.

While The Haunted Man is by no means perfect – Oh Yeah and A Wall are both bland offerings that add very little to the finished record – it is hard to fault the latest return of Bat For Lashes. In fact, it’s safe to say that Natasha Khan has once again managed to craft an album that ticks all the boxes, while also showing a maturity and evolution from her Mercury nominated sophomore album. There are few artists around who can match Bat For Lashes for consistency. Pressure or no pressure, she always seems to deliver.