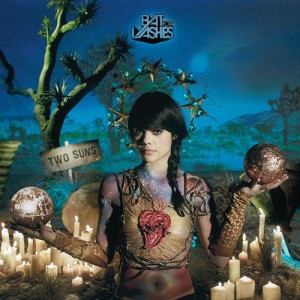 Right. First things first. Before we can even start on the music, we need to deal with the elephant in the room. Bat For Lashes, aka Natasha Khan, has created (another) alter ego for her second album Two Suns, the follow-up to the Mercury-nominated Fur And Gold. Ladies and gentlemen, meet Pearl, a destructive blonde femme fatale who represents Natasha Khan’s extreme nature.

If all this sounds a little familiar that’s because a) it’s been done to death already and b) it’s been done by Beyonce a few months ago in the shape of the laughable Sasha Fierce, an alter-ego Beyonce used to excuse her more libidinous ways.

Such unnecessarily convoluted claptrap is the kind of thing that makes some people involuntarily roll their eyes (your reviewer included) at the mere mention of Bat For Lashes’ name. The album’s press release reads like promotion material for Mystic Meg’s debut album rather than a record by a clearly very talented and unique voice – unique not because she creates kooky little stage decorations for her gigs or wears a cape when the feeling takes her, but because her songs are often brilliantly constructed, overflowing with sumptuous melodies. They’re the kind of songs that can stand repeated listens based on their quality, not on gimmicks or posturing.

Two Suns may well be all about the “philosophy of the self and duality”, but it’s also about brilliant songs such as opener, Glass. Built around that crystalline voice and cascading keyboard washes, the song suddenly erupts upon the arrival of guest-starring Yeasayer‘s restless beats that bounce and rebound in the distance as Khan unleashes some perfect vocal gymnastics. Yeasayer’s presence is also felt strongly on first single Daniel and album highlight, Pearl’s Dream, a catchy, synth and percussion heavy attempt at pure pop. It’s a guise that suits her, as Prescilla and What’s A Girl To Do? from her debut also testify.

Elsewhere, Khan proves that when it comes to keeping things simple, she can be just as devastating. Moon And Moon is a beautifully simple piano lament that ditches cod-spirituality in favour of direct emotion, dealing with loneliness and separation. Peace Of Mind, meanwhile, is a slow-burning, semi-acoustic demo that was fleshed out with an all-black, gay gospel choir to create a strangely moving, oddly unsettling three and a half minutes.

The album closes with another delicate piano piece, The Big Sleep, featuring the wonderfully melodramatic croon of Scott Walker. Spurred on by her illustrious collaborator, Khan’s voice reaches new heights, literally, as she holds a note that would make Bjork proud.

Producer David Kosten also deserves credit for keeping all the musical elements in place, creating dense musical beds or stripping things back as and when necessary. He can’t, however, save Two Planets or Good Love, songs that mire the latter half of the album, the former collapsing under the weight of the experimentation and the latter floating by unnoticed.

So, what have we learnt? Two Suns is a dense, intricate album that features at least six brilliant songs, two of which are pure pop gems. Natasha Khan is a very talented woman who can write gorgeous, heart-wrenching tales and sing them in a unique and haunting fashion. Unfortunately, it’s all too easy to look at the album cover, see the candles, the body paint, the mythical globes or hear the story of the alter-ego and just give up and ignore her altogether. The latter would be a real shame. So just don’t read any interviews and don’t read the lyrics. Just enjoy the music.