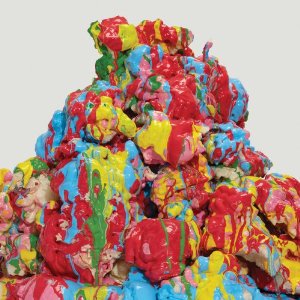 For most bands nothing spells ‘contractual obligation’ more than ‘remix album’. It used to mean nothing more than an excuse for overpaid producers to extend a track and possibly allow the rhythm section to have a musical kick-about while the singer had a fag.

The format changed when bands realised it would be more credibility-inducing to let their musical heroes re-interpret their tracks and twist, chop and mutate them beyond recognition into something entirely new.

Battles, of course, are not most bands. The New York experimentalists (with emphasis on the mentalists) and art/prog rockers have been ploughing a much feted furrow since their debut EPs crept out in 2006. They followed these with debut album Mirrored, and last year’s Gloss Drop. But between the two, founding member (and vocalist) Tyondai Braxton departed, which merely appeared to open up more possibilities for the band to draft in guest singers on individual tracks. Following this perverse logic comes Dross Glop, where the remaining Battles members have personally selected a different artist to remix every song from their previous album.

Take opener Wall Street which, in the hands of dance producerGui Boratto, has morphed from jerky, frenetic, punk/jit-jive into a spacious spaghetti-western, laid-back disco track. Futura’s original playful bounce has been given a fairground hip-hop re-tooling courtesy of The Alchemist with some horror film organ underpinning the creeping menace. White Electric’s staggered rhythm and proggy crescendo organ trills are taken on a stripped-back hip-hop trip with vocals from Shabazz Palaces; it ends up in a dark new place. The original Africastle (all plummeting guitars and pummelling beats) has been spliced and diced by Kode9 into a swooping headphone treat of string stabs and skittering beats.

It’s not all successful. As when The Field strip the warm vocals off Sweetie Shag to make a drone-monster of hypnotic repetition, much like their own shoegaze techno; unfortunately it drones along too long with too little variation. Similarly Inchowrm’s string and bass burps have disappeared under Silent Servant’s mix to leave a thin and aimless meander. Even the rendering by LCD Soundsystem drummer Patrick Mahoney and producer Dennis McNany to strip away the bombast of My Machines (and its accompanying Gary Numan vocal) manages to locate the groove but at the price of a lengthy nine minutes.

Where it works, as on (the brief linking tone piece) Toddler being extended by Kangding Ray into a dark textural piece, it is a pleasure. Another similar ‘stretch’ courtesy of Qluster mutates the hi-energy calypso of Dominican Fade into a spaced-out horn dub.

Highlights have to be the physical gruntings that peppered Ice Cream being warped by Gang Gang Dance into an off-key romp of militaristic squelches and effects zooming into the mix. The percussive steel band of Rolls Bayce becomes in Hudson Mohawke’s hands a marching mash-up with bells on.

For a finale producer Eye mashes the living remants out of Sundome’s original delicate string plucks into some disturbed scream-ridden chaos of percussion that sounds like nothing so much as driving a band into a brick wall while playing full tilt – which is a very good thing.

While nowhere near as thrilling as Mirrored, this is a curate’s egg of a companion to Gloss Drop. For such an experimental band maybe they could have pushed these remixes further instead of into a no-man’s land of accessible. For Battles, this is unchallenging territory.