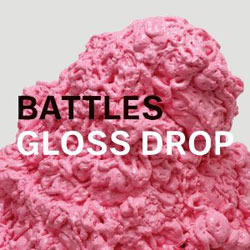 Although primarily an instrumental group, it was the incessant march-of-the-gnomes stomp of Atlas from the band’s previous album Mirrored that really bought Battles to widespread attention. It was seemingly everywhere, appearing on Little Big Planet, a Honda Civic Advert, and naturally the ATP movie.

With Battles second album beginning to take shape, founding member Tyondai Braxton (the vocalist on Atlas) left the group. This could have left Battles in ruins, but the remaining trio of John Stanier, Dave Konopka and Ian Williams solved the vocalist problem by simply recruiting a handful to match the outlines of the songs they’d written. It’s these guest vocalists that will pique the interest of those unfamiliar with Battles. Those who know the band already will know precisely what to expect regardless of the presence of Gary Numan or Boredoms‘ Yamantaka Eye.

The album starts off in comfortable territory with Africastle’s intricate instrumental workout, which is a perfect summary of what Battles do so well. A masterclass of intricate rhythms, atmospheric swells, staccato guitars and arpeggiated motifs it’s as if Battles have condensed their very being into a few brief minutes. Not only is it eminently dancey, it retains a dark edge that brings to mind feverish Fugazi breakdowns and hardcore menace.

For dessert is Ice Cream. It’s the first of the vocalist collaborations and features (DJ and Free Party legend) Matias Aguayo. Not only is it arguably the best song on Gloss Drop in terms of scope and execution it’s also Battles most accessible song to date. Gloriously sunkissed and upbeat, it’s no surprise that it’s the lead single from the album.

Futura follows with a pendulum like riff that slowly builds in complexity with only Stanier’s man-machine timing keeping it on track. The antithesis of the sunny disposition of Ice Cream, the looming organ drone and discordant percussion that underpins the track adds a creeping unease.

Inchworm returns to a similar palette to that of Ice Cream, chiming with good nature and adopting an almost calypso feel thanks to some swinging rhythms and a notion that the band have been fed through a Steel Drum filter. A slight Caribbean flavour is present on a number of the songs on Gloss Drop, but it’s most evident on Inchworm and the almost throwaway interjection of Dominican Fade.

Of the vocalists featured it’s arguably Gary Numan’s presence that will attract the most attention. His inclusion on a Battles album makes perfect sense, he practically invented the precise Android-Techno-Rock that Battles are so adept at. My Machines is a wonderful song, full of pulsating beats, forceful keyboards and a pervading sense of technological dread. In essence, it’s a Gary Numan song and it feels horrifically out of place here. As a stand alone single it would have been perfect, but with Dominican Fade hot on its heels it feels about as comfortable as a Goth at a tanning salon.

With Boredoms’ Eye rounding the album out in typically random fashion on Sundome – switching from blissed-out reverb drenched soundscapes to unhinged right-wing Dalek – it’s down to Blonde Redhead‘s Kazu Makino to step up to the plate on Sweetie And Shag. Naturally she does so with some style, adding her cute but cutting vocals to a twitching, insistent backing track.

Ultimately, there’s been no big step forward in Battles music, other than the slight softening around the edges suggested by the likes of Ice Cream or Sweetie Shag. The complex rhythms, impossibly tight drums and cascading electro-keyboards and guitars are all firmly in place, but for the most part the collaborations are an unmitigated success. It’ll be interesting to see where they go next.