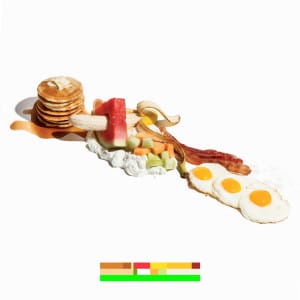 American experimental rock trio Battles are a band that occupy a rather strange place in contemporary music’s multi-dimensional landscape. The music they make is largely instrumental and disconnected from any sort of commercial or, at times, even traditionally melodic concerns. Yet, the trio of drummer John Stanier and multi-instrumentalists Ian Williams and Dave Konopka have carved out one of the most beguiling career passages in modern rock. They seem to be able to court both the alternative mainstream and experimental niche fringes with ease, making a kind of music that is not really made by anyone else. The band’s third record La Di Da Di is both a rejection of some of their previous work and a development of some facets that have made them such an interesting proposition.

Ever since founding member and vocalist Tyondai Braxton quit the band ahead of the recording of their last album, 2011’s excellent Gloss Drop, Battles have seemed at odds with whether or not to have vocals on top of their weird and wonderful rhythms. The last albums lead single Ice Cream was a crossover minor hit illuminated by Matias Aguayo’s unmistakable voice while Gary Numan featured elsewhere as well as Blonde Redhead’s Kazu Makino. However, this time the band seem to have fully committed to being a strictly instrumental group. It’s here that Battles truly define and refine their identity.

There’s nothing quite like the accessible pop dynamics that brightened Gloss Drop, though. Instead, the band are going deeper and harder into their own world of locked grooves, rhythmic pulses and monolithic electronic monsters. Opening track The Yabba is a good indication of the album’s dynamics. It lurches and grinds into life before settling into a supremely satisfying groove. It’s slow, focused but oddly compelling. For musical aficionados who are more interested in the science, structure and the sound of the music and the instruments, there are few bands operating within an ostensibly commercial sector that offer such prime material. As the band are wont to do, these grooves often burst into life in a thrilling crescendo. You never quite know what’s going to come next, but are always intrigued.

Despite making uncompromising music, Battles retain a quirky, playful nature and it’s again present here on the electronic skips and glitches of Dot Net and the odd and eerie organ sounds that haunt Megatouch, which sounds like something akin to a soundtrack for a psychedelic Scooby Doo horror mystery. Elsewhere, the music takes on harder edged sound, as on the brutal rhythmic assault of Summer Simmer. At times, it seems like Battles is one of the most appropriate band names there is, as the music often dissolves into a battle between all manner of sounds and effects.

Drummer John Stanier has always been Battles’ MVP and again here he proves his worth as one of the most skilled drummers around. Stanier’s routinely stunning drumming provides the human core that remains at the heart of Battles’ distinctly inhuman machine-like experiments. If the rest of the band’s sonic excursions represent music for the head, then Stanier’s military precision and expression represent music for the body. On an album like La Di Da Di, it’s a battle to see what wins out.

La Di Da Di is that increasingly rare thing in the age of streaming and multi-choice. It’s a record that you have to take in as one complete whole. You’ll enjoy individual slices, but won’t be truly fulfilled unless you take a deep dive straight in and luxuriate in all its sonic weirdness and insane brilliance.