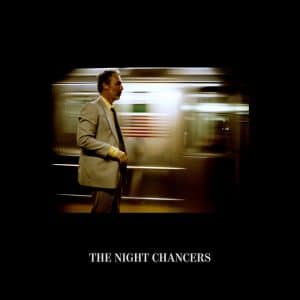 Baxter Dury – he of the iconic parentage and effortless diamond geeza cool – has returned to save us all from self-isolation and an endless stream of news conferences. His last record, 2017’s Prince Of Tears, proved that he was on the rise (still) and still ambitious.

After a series of quality records – Happy Soup, Floor Show, It’s A Pleasure and Len Parrot’s Memorial Lift were all critically acclaimed – he finally lived up to his ‘Serge Gainsbourg as written by Charles Dickens’ reputation, and delivered a masterpiece. Prince Of Tears should still be on or near your stereo device or playlist selection algorithm, and if it’s not, ensure that it gets a spin before you listen to The Night Chancers.

See, Prince Of Tears and The Night Chancers feel like two of a perfect pair. All of the sounds of the former are evident in the latter, and Baxter’s unique and instantly identifiable urban poetry is still here in abundance. But The Night Chancers also feels desperate where Prince Of Tears felt confident, it’s grubby where there once was beauty, and it’s ugly where it should be sexy.

The title track, with its reluctant melancholia and woozy, trippy funk, is a harrowing tale of being left alone in a hotel room while the sun rises. The bass is sublime, as is usually the case on Baxter’s records, and the reptilian delivery emphasises the accusatory, sinister undertone of the lyrics. Beautiful.

Those looking for Serge-y moments will find tonnes to enjoy here – from the miserable yet sensual Carla’s Got A Boyfriend, to the frankly obscene mood (conjured by some orgasmic backing vocals) of Samurai. There are tantalising new flavours in the mix, too – from the springy soul of Hello, I’m Sorry to the Chromatics-evoking electro house of I’m Not Your Dog (which, perversely, sounds like it could have come from Charlotte Gainsbourg‘s last record).

Say Nothing sounds like Tom Tom Club if they had lived in Purgatory for 50 years – and has an earworm refrain of “Baxter Loves You”, and Slumlord takes everything great about Baxter’s music and distils it, condenses it and dries it out, resulting in the most Baxter-ish song he’s ever done.

Of course this is a great record. Of course this is essential listening. At this point in his career he’s still getting better, and that’s a scary proposition. Hopefully Baxter Dury finds time to rush along his next record – and one imagines he might have a little time on his hands over the next few months.