by Michael Hubbard
published: 31 May 2010 in Album Reviews
Tweet 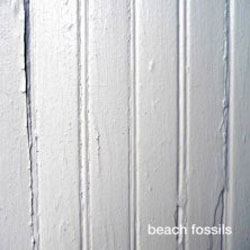 Dustin Payseur’s debut album as Beach Fossils could hardly be more hipster. Self-recorded, it features tracks with titles like Daydream, Vacation and Lazy Day and finds space for the word “beach” in both the title of the album as well as the band name, for they are one and the same. Inevitably what follows will be dreamy and summery.

Thus it proves. If Beach Fossils was a holiday snap, it would be sun-bleached and the colours would be deeper than strictly representative. Of course, Payseur’s from Brooklyn, hipster home of choice for anybody with a guitar who fancies a lo-fi reminisce down memory lane (real or imagined – another of the tracks here is called Golden Age) and on through gentle sandy dunes to the gently breaking waves (that’s them, breaking gently on the gentle final track Gathering). So far, so C64/dreampop/been-there-done-that/smackable hipster.

But none of this sceptical long view accounts for the fact that Payseur’s way with melody and atmospherics has ensured he’s turned in a thoroughly likeable album, the arrangements on which have clearly been planned to sound unplanned. Memorably jangly guitar riffs, harking back to the mid-’80s and especially The Jesus & Mary Chain – Vacation’s intro would like to be a Smiths song when it grows up, so in debt is it to Johnny Marr – are augmented by spare, precise basslines, simple unobtrusive drum patterns and Payseur’s multi-tracked drawl. He often double-tracks himself in different octaves, recreating those classic male-female voice harmonies beloved of Slowdive and Rilo Kiley.

Throughout he sounds chilled, bored even. Yet the vibe of this album suggests he considers himself to be fortunate in enjoying leisure time. As a consequence there’s nothing here that rails against anything much, no deep sentiments, no sense of alienation of the kind Wavves makes a habit of. Instead he kicks back and sinks into the rhythms of those gently breaking waves, doubtless cracking open a can and pulling his baseball cap down.

There’s nothing complicated about this music or the lifestyle it eulogises. Beach Fossils is the sound of life being enjoyed for the simpler things and getting over the rest. It makes for a languidly pleasing bout of escapism at the very least.