by Alan Ashton-Smith
published: 11 May 2018 in Album Reviews
Tweet 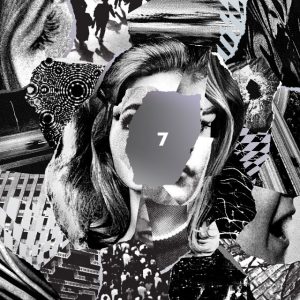 In poetry, sonnets have a feature called a volta, the Italian word for turn. The volta usually occurs just over halfway through the poem, after the eighth line of 14, and it marks a change in tone or mood as the poet gathers their thoughts on the subject matter and begins to drive their idea home. There’s something like a volta in the seventh album from Beach House; it arrives almost exactly halfway through Dive, the central track, and it’s the moment when the song accelerates, growing from a series of echoing chords and taking on a dense drumming pattern and jagged guitar line that recall early New Order.

7 might also turn out to be a volta in Beach House’s oeuvre. During the album’s first half there are certainly indications that their sound has changed more since their previous record, 2015’s Depression Cherry, than it did between then and their 2006 self-titled debut. But it’s once that midway point in Dive is reached that the fact of the stylistic shift really hits home.

In the grand scheme of things it’s not a radical departure, but it feels significant within the context of Beach House, a band that has somehow always seemed to exist in a state of suspended animation, their ethereal sound giving them the quality of timelessness that one finds in dreams. That ethereality is retained up to point, partly in Victoria Legrand’s voice, but also in the music, which at times is as formless and unworldly as anything Beach House have produced. There is, however, a harder edge than ever.

The opening track, Dark Spring, is a case in point. Beginning with a decisive bit of drumming (touring drummer James Barone plays throughout the album) it adopts a motorik rhythm and soon brings to mind the latter-day psychedelia of Toy and The Horrors. This stronger rhythm immediately earths the record. Beach House have often been described as dream pop, but they sound very much awake here.

Lyrically, this is often an awkward, anxious record. “Get dressed to undress, depress to impress,” Legrand sings on Girl Of The Year. The accompanying music is beautiful, closer to the classic Beach House sound than most of the other tracks, but combined with the words it creates a feeling of numbness. Drunk In LA does feel intoxicated, but not in the staggering, physical sense that one might expect music could convey very well. Rather, it focuses on a drunken mental and emotional state; there’s a wounded, muted bravado. Legrand sings about “A bathroom I can hide, Down the hallways of a high school, And the dances left behind”. It sounds like someone on the run from their prom: paranoid, romantic, uncomfortable all at once.

Beach House have described 7 as a conscious departure. They’ve taken a new approach with its recording, working without a producer for the most part, and starting off the recording process in a home studio. They have also focussed on the sound as it’s captured in the recording, ignoring how they might translate it into the live environment. This explains much about why 7 sounds the way it does: what’s left unanswered is the question of why it’s taken seven albums for Beach House to change their approach and adjust their sound. But the consistently high quality of their previous work might explain that: it’s never been broken, so why would they attempt to fix it?

7 might have been a gamble for Beach House then, but they don’t appear to have lost anything. What remains to be seen is whether they stay on the same path of progress with their next record. Closing track Last Ride might offer a hint: it starts out as the most shapeless, ethereal track of the album, but over it’s seven minute duration it gradually accumulates structure, rhythm, life. It’s as if the music is waking up from the beautiful dream of the old Beach House.