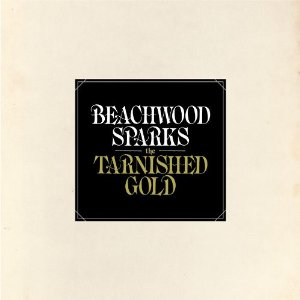 One of 2012’s more surprising musical developments has been the return of the sweetly-melodic, psychedelically-inclined, alt.country quartet Beachwood Sparks. The band came to prominence at the start of the millennium, releasing two acclaimed albums on Sub Pop (2000’s eponymous debut and 2002’s Once We Were Trees). They may have left in slightly subdued circumstances on their Make The Cowboy Robots Cry EP in 2003 but The Tarnished Gold sees them return sounding fresh and revitalised, delivering an album that more than matches their earlier output.

The genesis of the album can be traced back to 2008 when the band briefly reformed to play a handful of shows to coincide with Sub Pop’s 20th birthday celebrations. It resulted in the individual members regrouping from the various other bands that had sprung up in the intervening years (principally groups like Mystic Chords Of Memory and The Tyde although Dave ‘Farmer’ Scher also became part of Interpol’s live band and Aaron Sperske played drums for Ariel Pink’s Haunted Graffiti).

The most striking aspect of The Tarnished Gold is also arguably the most simple, namely how much it sounds like an album made by a band who have resolutely taken their time. In these fast-paced, information-heavy times many younger bands bash out albums at rapid speed, occasionally sacrificing a little quality along the way. This album represents something of an antidote to this kind of unrelenting progress, demonstrating the value of a patient, unrushed approach.

It’s clear from the start that their songwriting abilities have not faded during their years away. Indeed, the consistency of the album and the reassertion of their musical identity are quite heartwarming to behold. They announce their return in striking, confident style over the opening two tracks. Forget The Song is classic Beachwood Sparks – chiming, hook-laden guitars settling around the vocals of Chris Gunst. His stated desire to “lay down the weight that I’ve been holding and hope that the spring melts the winter in my heart” is one of several particularly affecting lines. It also presents them as a sort of West Coast Teenage Fanclub, impervious to modern trends or fashions, preferring to concentrate on reinforcing the simple, emotive power of songs. It is followed by the self-referencing vindication of Sparks Fly Again, with Scher providing vocals on this occasion, a track that sees their mastering of Byrdsian harmonies firmly re-established. Lyrics like “the music is a home to return to” do much to help explain the nature of and reasons for their reappearance.

Two of the highlights of the album come with the title track and Water From The Well. Both are cut from similar cloth – sounding languid, unpressing and redolent of warm summer nights. Talk About Lonesome and Alone Together may both have a melancholy slant lyrically but the listener emerges paradoxically uplifted. No Queremos Oro is notably different, possessing a discernible Calexico feel to it, not just in terms of lyrics and language but also in the percussion-rich, atmospheric sound. The only real dip comes towards the end of the album – The Orange Grass Special sounds a little lightweight and superfluous in comparison, although Goodbye ensures the album closes on a (short but sweet) positive note.

The band are probably sanguine enough to realise this album is unlikely to win them swathes of new admirers but it will undoubtedly please long-term fans. When, during Earl Jean, Gunst sings “I love a happy ending” over honeyed guitars it seems palpably appropriate, and caps a sunshine-filled offering. Other guitar bands may generate more in the way of headlines this year but few will match the quality of The Tarnished Gold.