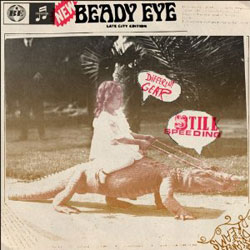 Like show jumping, album reviewing is 90% about the approach. Which makes Different Gear, Still Speeding a fence. A fence that could be dealt with in a multitude of different ways. Some of which will end in a graceful arc, and some of which will involve tripping, breaking limbs and being put down.

How then, to advance upon Beady Eye’s debut. Treat it as a game of Lennon & McCartney bingo: a bit of Live And Let Die, yep. Oh wait, that one is Instant Karma, tick. OK, OK, we have a Get Back sound-alike, yes, yes, yes. B-I-N-G-O.

Or you could list, alphabetically, the bands that Beady Eye don’t sound like. Abba. The Be…ta Band. Can. Depeche Mode. Enya. Maybe you throw originality away, and go at it as you would go at Oasis. Mention ladrock. Mention Britpop. Mention the best album since Definitely Maybe.

Or, alternatively, take the George Michael approach: smash into a high street store in a car while completely off your tits on herbal psychotropics. (Allegedly.) Sorry, that should have read: listen without prejudice. Take the album on its merits and conclude that Different Gear, Still Speeding is… alright.

Although, it’s kind of hard for anything Liam Gallagher does to be unprejudiced – either positively or negatively. Fair to say, your opinion of Oasis will definitely have a bearing on your opinion of Beady Eye. Unsurprisingly really, because, perhaps more so than any other vocalist of the past 15 years, Liam has come to be the aural personification of his (former) band. To hear him is to hear Oasis. Sorry, Noel.

Here he’s in great voice. Kill For A Dream is the kind of lighters-‘n’-Stella-in-the-air, soundtrack-for-a-national-tragedy ballad that, despite all the suffering the brothers Gallagher put us through, they never actually lost the knack of.

But actually, the single best bit is the bit you can’t easily draw back to something Oasis-y. Bring The Light is a spectacular stomp, rollicking in on the back of a bar-room piano and with Liam engaging in an irresistible game of call and response with his backing singers. It’s straight out of Motown.

So it’s a mixed bag. Yet because Different Gear, Still Speeding is neither spectacular nor disastrous, the conclusion is dictated by how you came at it originally. Hopeful that one of the great frontmen of his generation still has an outlet for his talents? You won’t be disappointed. Full of derision that the less talented one out of Oasis is going to be found out on his own? You won’t be dissuaded.