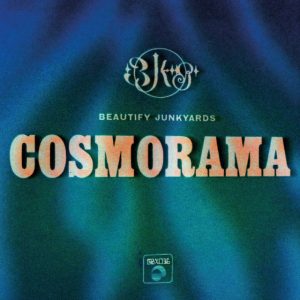 There’s a sample that slowly reveals itself deep from within the digital birdsong and erratic undulations of beat spackled Tropicalia (Trop-Hop anyone?) that drive Dupla Exposição, the first song on Cosmorama, the new album by Beautify Junkyards. It’s a snippet of Lewis Carroll’s inquisitive Alice noticing her surroundings to be “curiouser and curiouser…”. Rather than being threatened by new topographies and obscure experiences, the precocious infant indulges her fascinations and delves ever deeper into this fantastical realm, entranced by the magical sights it shares. Listeners to Cosmorama will be similarly rewarded for their patient explorations into its territory, a world of secret gardens, youthful fountains and mysterious nightclubs.

Released on the always intriguing and impeccably packaged Ghost Box label, this is record number four from the Portuguese hauntological sextet, infused with lingering charm. Fans of ’90s dance pop will be pleasantly surprised as the next track Reverie shimmies out of its leisurely torpor. Featuring the hazy tones of Smoke City’s Nina Miranda, never raising her pitch much above a humid and sultry murmur, it’s suffused with a hushed lyrical potency and assertive melody that flutters like a hummingbird. Her silken tenor on that group’s seductive 1997 hit Underwater Love took cues from Astrud Gilberto’s languid teasing Girl From Ipanema and was a welcome counter to the overly dramatic urban dissonance and lyrical weariness of most other trip-hop ensembles prevalent at the time.

For the track Parangolé, Miranda’s ubiquitous smoky whispers act as a siren call over enchanting chromatic swatches of baroque samba, but hers is not the only voice that tempts. The nostalgic chug of Deep Green features the keenly sharpened wistfulness of Lake Ruth’s Alison Bryce, channeling the spirit of Broadcast’s much missed Trish Keenan. At the halfway point, on The Collector, perhaps inspired by the ominous 1963 John Fowles novel as much as the library soundtracks of ’70s melodramas, frontman João Branco Kyron warns of secrets whispered, that fade into the night. For the cryptic North African tinged Zodiak Klub, the album’s most psych heavy number, Kyron’s drowsy vocal tells tales of mesmerising flashlights that wash away sorrows, as heavy dub bass lines assimilate with haunted Moroccan flourishes.

Listening to the hypnotic Vali, you can’t help but picture yourself sat beneath some large arbor as the musical canopy sways radiantly around you, the median temperature slowly escalating as shadows of flute and cello, courtesy of Espers’ Helena Espvall, shoot the breeze. On album closer The Fountain, where the simmering pleasantries appear they might finally combust, there’s another sample, not Alice this time, rather a young girl recanting experiences on psychedelics, explaining how everything is more intensified. Combing endlessly for a sound both identifiable and enigmatic, Beautify Junkyards act as elusive pied pipers, offering an immersive and often iridescent path into the romantic heart of darkness.