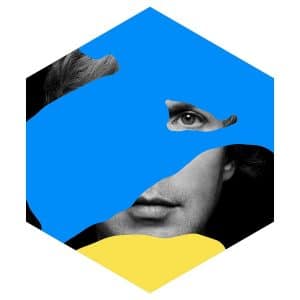 The ‘musical magpie’, the ‘kooky Scientologist’, or plain Beck Hansen returns from the wilderness with news from his latest planet of sound. Colors (American spelling, grrr) arrives many years after the Grammy-winning, heart-worn musings of Morning Phase. The delay was due to the exciting new sounds being generated and a desire for freshness of approach. Intrigue piqued? Are there frontiers of sound ready to fall in its wake? Will new empires and philosophies rise from its ashes? Or is it just another Beck album?

As a solo artist Beck’s ability to be ahead of the curve means he rarely takes a mis-step or retread. From his lo-fi beginnings (not even ‘2 turntables and a microphone’) of weathered acoustic, shabbily played with ‘anti-folk’ attitude there were songs so timeless hiding under the aural artifice even Johnny Cash could see to cover Rowboat from Beck’s One Foot In The Grave album.

Since then he’s followed a determinedly idiosyncratic path, creating surreal collages of sound and imagery. Glimpses of humanity leaked out of Mutations and the heartbreak duo of Sea Change and world-weary Morning Phase. Sleaze-funk was appropriated on Midnite Vultures and genre-mashing please-all on Guero/The Information. The one thing to sure of with Beck is he’s never shy to defy expectations.

Anticipation is high for title track Colors, which bears an uncanny resemblance to Aracde Fire’s penchant for pan-pipe sampling ’80s schtick. But surely Beck will whip this into a wry, dystopian commentary replete with whip-smart lyrics and spanking samples? Well, not quite. Instead there’s some generic-sounding music, with the requisite breaks and harmonies that leave no overall lasting impression of what just happened. Ah, this must be the ‘traditional’ ‘wrong-footed’ album opener, that throws all expectations, before the album ‘proper’ starts.

This heightened sense of anticipation continues with Seventh Heaven, with its frothy tales of escape set to a generically bland up-tempo number, and I’m So Free, seeing some shoe-horned ‘rapping’ to enliven proceedings, the likes of which used to climax with Beck’s penchant for stringing surreal non-sequitors, but now comes across as ‘embarrassing dad rap’.

The problem with Colors is that where once he innovated, Beck now seems to be imitating the slew of fizzing faceless pop clogging the airwaves buried under a mesh of corporate production. Created by Beck and producer Greg Kurstin (see also Liam Gallagher‘s new album and the work of Adele) playing the majority of parts, and pieced together when both were available, the results are lacking in either conviction or Beck’s unique personality. Cases in point being Dear Life sounding like an enervated Elliott Smith in its jaunty The Beatles-esque piano trills. No Distraction is the sound of inspiration scraping the barrel, going through and finding Bruno Mars jamming on some cod-reggae. It’s utterly horrible.

Musically, Beck hits paydirt with the killer whammy trio uber-pop of Dreams, Wow and Up All Night. Without these, Colors would fade into black and white. Judging by their vintage, Dreams (2015), Wow (2016) and Up All Night (2016), Colors isn’t “so pine fresh” (Wow) as it hopes. He’s spoken of how the album was made before Donald Trump’s arrival in the White House, preciptating a mood which he felt would be less receptive to the excitable pop sounds of Colors. That the world has not in the intervening year noticeably improved suggests the delay was ultimately nebulous.

To see the album out, one could be mistaken for a processing mix-up with Coldplay’s ‘difficult’ X&Y album as both track titles Square One and Fix You feature on both. Mercifully beyond title there are no similarities. Square One is a throwaway mish-mash, but Fix You is a slushy downtempo outtake from Morning Phase. They conclude an album that stands as a defiant volte-face for anyone hoping for Morning Phase 2, one that will undoubtedly lure in mainstream fans who shied away from that ‘weird ‘Loser’ dude’, enticing them in by the sparkling, vapid production surrounding songs that sound like parodies, but aren’t.