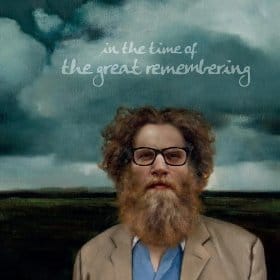 Connoisseurs of coffin nails will no doubt delight at the name of Ben Caplan’s backing band. In these days of anti-smoking hysteria their title and the music behind it belies a cheeky form of rebellion, conjuring up late night bars, too much booze and a crafty hit of nicotine in the rain outside while a fight breaks out on the dance floor.

Caplan’s album is a mish-mash of many styles, all of which would find their home in roadhouses and smoking dens. The album’s predominate vibe is bluesy shanties, with Caplan’s deep growl reverberating like a hybrid of Eddie Vedder and the throaty rasp of Tom Waits. The Casual Smokers themselves accompany on a variety of traditional instruments veering between jugband and gypsy punk. The odd flash of far-eastern exoticism can be heard in the likes of the stomping Conduit, but the overall effect is like a group of hillbillies have infiltrated a Brechtian cabaret.

This collection of songs is pleasingly ramshackle, as unkempt as Caplan’s picture on the sleeve. Seed Of Love is a certain highlight that sees Caplan dueting a song that turns swapping phone numbers into something much more epic and significant. Elsewhere, the break-up song Drift Apart builds up to some tremendously hand-wringing moments of despair. The tribal infused folk lullaby Rest Your Head feels a bit like an odd fit as Caplan’s vocals seem to overpower a song that probably demanded a subtler approach. However, the blues/gospel of Down By The River is the right showcase for Caplan – booming, bellowing and sweeping across the music. In contrast, Leave Me Longing’s comparatively minimal approach provides one the album’s more powerful moments.

Although this collection is a diverse and interesting experience there are certainly moments when the band’s influences come too much to the fore and the Waits-isms have a much freer rein in the second half of the album. While this isn’t a bad thing, it probably loses the album a star in terms of originality.

Given the contemporary scene Caplan could have taken an easy approach and issued an album of well-crafted but ultimately generic folk songs. Instead, there’s a brave sense of experimentalism and storytelling that might not work one hundred percent but is still to be applauded. These jagged edges are endearing and add to the diverse and entertaining atmosphere. In The Time Of The Great Remembering is one of those albums that might not be a classic, but is none the less fun while it lasts. Like a sneaky cigarette behind the bike sheds this is an illicit pleasure that’s best enjoyed casually.