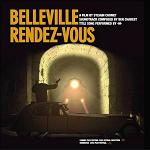 Film soundtracks usually fall into one of three categories. In the pre-videoera their function was to serve as a souvenir of a much-enjoyed movie, butby the ’90s, soundtracks had become just one part of the film companies’marketing apparatus, often bearing little or no relation to the blockbusterthey were promoting. In a few, all too rare, cases, film soundtracks havetaken on a life of their own, being admired as self-contained works of art �2001: A Space Odyssey, Apocalypse Now and Blade Runner being three thatspring to mind.

French jazz guitarist Ben Charest�s score for Sylvain Chomet’s much admiredanimation feature Belleville Rendez-Vous falls into the latter category,being an enjoyable artistic statement in its own right, but it also servesas a souvenir of this remarkable film, and, given the film’s lack ofdialogue, as a means of driving and underpinning the action.

The overall effect of this m�lange of different styles is one of pastiche,nostalgia and unsettling dislocation, not unlike prolonged exposure to oneof Frank Zappa‘s ’60s sound collages � without the rude bits of course.

Disney this most certainly isn’t. Ben Charest’s intention is, ultimately, toconvey the singular mood of Chomet’s film, a kind of jauntyother-worldliness and, whether it�s on the Herbie Hancock pastiche of JazzyBach, sub rock and roll of the hilarious Pa Pa Pa Palavas or the raunchyOpening Theme, he succeeds admirably.

It’s the Belleville Rendez-Vous theme, however, that stays longest in thecranium, a motif that occurs in three different versions, two of themperformed by M, but Charest also cleverly includes the original demo version, therawness of this recording adding a certain manic energy to proceedings, thesame holding true for much of the soundtrack.

As with most movie soundtracks it helps if you have seen the film but, sovivid is Ben Charest’s music, that it is by no means essential in order toappreciate this album. The odds are, however, that once you have seen themovie, you’ll also want this wonderful recording � and vice versa.