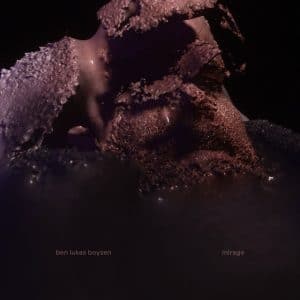 Over the past decade, London based independent label Erased Tapes has become a something of a byword for high quality experimental electronic and modern classical music, with an impressive roster of artists including A Winged Victory for the Sullen, Ólafur Arnalds and Nils Frahm.

Berlin-based producer Ben Lukas Boysen, while yet to achieve the same levels of recognition, is another talented exponent of the same blend of classically-trained compositional craftmanship and processed, modern textures.

After a decade of releasing ambient and dubstep-influenced records as Hecq (named after the studio where he was working at the time), Boysen signed with Erased Tapes in 2013 and has since released two albums under his own name. The second of these, 2016’s Spells, was his strongest release yet, combining programmed piano pieces with live instruments including harp, cello and guitar into a cohesive listening experience that was both intimate and cinematic.

New release Mirage feels like very much a continuation of the same approach. Joined by two long-time collaborators and Erased Tapes labelmates, the cellist Anne Müller and saxophonist Daniel Thorne, Boysen once again combines the organic and the synthetic in a way that feels fluid and natural, with the subtleties of his compositions often only becoming apparent after several listens. “A lot of the elements and instruments you hear on the album are either not what you think they are, or exactly what you think they are but behave differently or they’re elements you definitely know but they are hidden, processed, or morphed into something else. With Spells and Gravity I was trying to hide the machines. On Mirage, I’m trying to hide the human,” he notes.

Mirage draws you in instantly with arresting opening track Empyrean, with otherworldly, splintered synth notes shimmering out of the speakers before gradually giving way to a fractured rhythm made up of synth notes, then playing out with swathes of stately, funereal cello and organ. Kenotaph is underpinned by a relatively simple, uplifting piano melody, but the faint echoes you hear are the result of it actually being two pianos being played simultaneously – one acoustic, one digital. Medela is all jagged and menacing, with Thorne’s saxophone so bent out of shape it’s almost unrecognisable as a brass instrument, but Müller’s cello in contrast is allowed to cut through the layers of electronica in a way that’s piercingly pure.

Venia is probably the Mirage’s most blissful, euphoric track, similar in style to Frahm’s All Melody album, and the work of other atmospheric voyagers such as Blanck Mass, while Clarion, with its heavily treated piano and elegant strings, feels closer to the work of Arnalds and Max Richter. Boysen finishes off with Love, arguably the most shapeless of the six offerings here, although it does build to an impressive crescendo before fading away into ripples and murmurs of sound.

Mirage establishes Boysen further as a key player in the Erased Tapes ensemble of modern composers. That said, his work – while consistently inventive and impeccably constructed – does fall just short of the very best the genre has to offer, perhaps because it lacks the truly standout moments of jaw-dropping beauty or virtuosity that we have seen from Frahm on Spaces and All Melody, or Arnalds on re:member. Nevertheless, this is still a fine record.