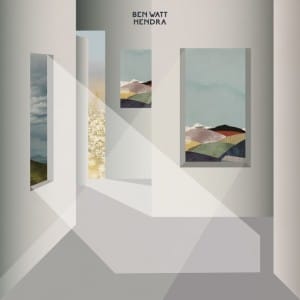 In 1983, Ben Watt released his debut solo album, North Marine Drive. In the 31 years since its release, Watt has been half of one of the most enduring partnerships in music, Everything But The Girl, transformed himself into a highly sought after DJ and remixer, set up a much respected record label, Buzzin’ Fly, written two affecting memoirs, and contracted a rare auto-immune disease which left him close to death and missing most of his small intestine.

So, in retrospect, it’s not so surprising that it’s taken over three decades to record a follow-up to North Marine Drive. The resulting album, Hendra, is not what you’d expect if you’re familiar with Watt’s latter-day fascination with dance music (this is the man who once released a collaboration with Estelle improbably titled Pop A Cap In Yo’ Ass). Instead, Hendra feels like a more polished, grown-up version of that debut – a collection of smooth, introspective adult pop songs.

For Hendra is very much the product of a middle-aged mind, which isn’t intended to the insult that some may take it to be. On the surface, the songs sound contended, peaceful and easy to listen to – but dig deeper, and you’ll find tales of disillusionment, grief and depression that make this album a much more multi-layered experience than you’d expect. In a way, it’s a similar approach to that of his long-term partner Tracey Thorn‘s solo albums: on the surface, polished and comfortable, with a darker edge lurking just underneath.

The album’s second track, Forget, is a good example: it skips along delightfully with a chorus that seems ready made to hum along to, but the general tone is morose and regretful, with Watt wistfully singing “who am I fooling when I say I have no regrets? You can push them to the back of your mind, but you can never forget”. Bereavement hangs heavy over the record as well, with the title track ruminating on the death of Watt’s sister, and the beautiful Matthew Arnold’s Field describing the ordeal of scattering a loved one’s ashes.

It would be wrong to assume that Hendra is a tough, emotional listen though – on the contrary, there are some moments of self-deprecation that are quite delightful. Young Man’s Game is perhaps the best example of this, an arch look at his career as a 40-something DJ. “I’m not as good as I used to be at the late nights, but just look at me” opens the song before questioning “should I act this out or act my age” before drinking another Jaegerbomb. Like much of the album, it’s a wistful, bittersweet look at life’s changing’s priorities.

There are times though when Hendra doesn’t quite hit the mark as it should. There are a few lyrical clangers, from the opening title track’s line of “you know what they say about silver and linings” to The Gun’s well-intentioned if clumsy sentiments about gun control (“as the weekend comes, well here’s a thought, neighbours relax with guns and shooting sports, and most of the men going rat-a-tat-tat, well they haven’t got any problem with that”). Musically too, it sometimes crosses over the line from cosy to overtly bland, such as the somewhat cloying Spring. Watt has a strong, impressive voice which, while it may not be as distinctive as Thorn’s, carries even the weaker tracks.

There’s a good cast of supporting musicians on hand to realise Watt’s vision, with former Suede guitarist Bernard Butler contributing some typically fiery riffs throughout (especially on the excellent Nathaniel) and Pink Floyd‘s David Gilmour adding a haunting slide guitar to the spine-tingling ballad The Levels. Ewan Pearson (who’s also produced Thorn’s recent solo works) adds a lovely, warm sheen to many of the songs, giving a classy final touch to an album that has more hidden depths than its MOR surface may suggest.