Benjamin Clementine – At Least For Now 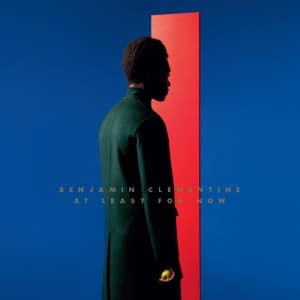 From being homeless in Camden and busking on the Paris streets to having a Mercury Prize-nominated début album, there are not many rises to prominence that can match the one of Benjamin Clementine. During his turbulent late teenage years, music was the 26-year-old’s one constant and it was his time in France that helped him discover his unique style, subsequently resulting in his being picked up by an agent.

While Clementine does not seem drastically different to any other singer-songwriter on the surface, there is much more to his art than meets the eye. In this sense, he is the perfect candidate for the Mercury Prize, which always features a few unknowns amongst the more established names like Florence And The Machine, Jamie xx and Slaves, all on this year’s shortlist.

At its most basic, Clementine’s sound can be described as one man and his piano. Yet it is At Least For Now is not nearly as straightforward as that would suggest. For one thing, Clementine has a remarkably soulful voice, one that has drawn comparisons with both Nina Simone and Antony Hegarty, singer of sometime Mercury nominees Antony And The Johnsons. Then there are his unconventional song structures.

During his time in Paris, Clementine took inspiration from poets and singers he admired, quickly realising his songs would be meaningless unless they reflected his own personal experience, while he also ditched the traditional verse-chorus-verse structure. These developments are both evident on At Least For Now’s opening track, Winston Churchill’s Boy, where he reworks the former PM’s speech to capture his own upbringing.

“Never in the field of human affection/ had so much been given for so few attention,” he delivers in a quirky poetic style. “Nobody knows what’s on this boy’s mind.” It is a distinctive and poignant opening to the record. There is also an unmistakable sweeping drama as Clementine’s thoughts tease playfully with his piano keys, before he gives a glimpse of his vocal potential when he bursts into brief song towards the powerful climax.

Following the almost theatrical opening, Then I Heard A Bachelor’s Cry gives Clementine his first opportunity to really stretch his vocals, as he moves effortlessly from a shuffling mumble to a high pitch whoop. Cornerstone, the title track from his debut EP, is another perfect example of emotional power of his music, as Clementine sings, “I’m lonely, alone in a box of stones” over a beautiful piano melody.

It is arguably the best and most affecting moment of the record as it’s Clementine at his most vulnerable. Yet there is also variety over the album’s eleven tracks, with more recent single Condolence mixing sparse piano keys with a juttering drum beat, giving it more of a bite compared to other tracks on At Least For Now. Then there’s popular live track London, where a shuffling, humdrum beat bursts into a grandiose, melancholic chorus.

Despite the inescapable beauty of At Least For Now, not all of Clementine’s daring compositions are successful. Adios is a frantic, unhinged track with so much going on that it is hard to really buy into it. However, it is a rare misstep. When he is more focused the results are impressive, as shown by St-Clementine-On-Tea-And-Croissants, which is an all-too-brief but delightfully catchy bluesy number, or the brilliantly dramatic Nemesis.

While At Least For Now won’t be everyone’s cup of tea, it is fully deserving of its Mercury Prize nomination. Clementine is a remarkable talent, who is fiercely individual in what he does and, as a result, he has created a bold, memorable debut album. He also possesses some of the most incredible vocal cords around, a fact hammered home by stunning closer Gone. Don’t be surprised if he walks home with the Mercury award.