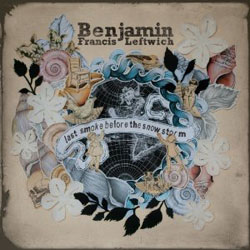 While it’s not quite as fashionable to be a male Britishsinger-songwriter with a guitar strapped to his back as it was in themid-decade nadir of James Blunt, James Morrison et al, it’sstill difficult to wander across any music festival without hearingthe plaintive, lovelorn fingerpicking of a floppy haired kid emotingplaintively from makeshift stage.

There’s obviously still an audience for it, and despite their (much better) female counterparts (Alessi’s Ark, Laura Marling), ordubstep influenced crooners (James Blake, Jamie Woon)hogging the limelight, heart-on-sleeve troubadours, however out offashion, will always have a place in our musical heritage. So it’srelatively heartening to see a young, fey Englishman getting a quiet,contemplative record out amid all the noisy bombast of whatever theblogs are pushing this week. Unfortunately, “relatively heartening” isabout as good as it gets on Norwich-based Benjamin FrancisLeftwich’s debut Last Smoke Before The Snowstorm – a so-so mix ofgenuinely heart-stopping moments that punctuate a good-natured butpretty forgettable piece of work.

It’s a shame, as Leftwich’s career up until now has been on theup-and-up. Feted by radio stations, and proving himself on the Londonclub scene with some assured and heartfelt gigs, his debut four trackA Million Miles Out was a thing of startling, introverted beauty, ledby standout single Atlas Hands, and supported by three other verycommendable tracks. Atlas Hands returns the album, and you rather wishhe’d gone the whole hog and peppered it with the rest of thetracks.

The record starts off confidently. Pictures is one of the album’shighlights, the fragile, languid vocals, sighed backing vocals andrelatively insistent guitar plucking combining to create somethinggenuinely affecting. But then… it happens again. And again. And justwhen you think the album’s taking a slightly different turn (thekeening electric guitar and – just audible – drums! on Stole You Away)it quickly veers back into acoustic introspection. This isn’t to saythat the 10 tracks on Last Smoke are bad – in fact, all haverelatively singular melodies, but there’s only a couple of tracksyou’d go out of your way to replay unless you had to.

It’s perhaps a little unfair to dismiss much of the record simplybecause he decides to stick to a formula – one just wants a little bitof a kick to some of the more beige-coloured tracks (the eponymousalbum track, despite having a bit of gypsy violin thrown in, is a realslog and closer Don’t Go Slow hilariously doesn’t take its ownadvice. At least Bon Iver had a horn section). Yet there’s afew moments of real beauty through levity – Box Of Stones, despitesome pretty duff lyrics about rocks and forests, is a realarms-around-your-loved-one singalong, and there’s a touch of thesummer evening poppiness of The Byrds about Shine, which, whileshort and a little throwaway, raises a wistful smile.

But there’s a problem that only begins to manifest itself onceyou’ve got through half the record – and one that’s even manifested inthe album’s title. Leftwich’s lyrics, all metaphors and wide-eyedelicitations of natural wonders can sometimes be pretty trite. Thereis sure to be a school of thought that calls them “intriguing” and“oblique” – but really, when it comes down to it, they’re often abunch of relatively evocative sentences strung together with littleclarity. On Atlas Hands, he pulls it off with aplomb (With “I’ve got aplan/I’ve got an atlas in my hands/ I’m gonna turn when I listen tothe lessons that I’ve learned” you get a nice sense of dislocation andwandering) but on too many others the lyrics seem to denote a vaguefeeling of misty-eyed emotion and little else.

Benjamin Francis Leftwich has the potential to become a much-loved artist -his ploughing of such a singular furrow actually displays a level ofconfidence that perhaps some of his peers don’t have. You get thefeeling that Last Smoke Before The Snowstorm is the first tentativestep in a long career rather than a blustery opening salvo in one thatwill burn out quickly.