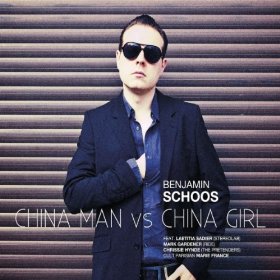 In 2006 Miam Monster Miam created, along with friend Jacques Duvall, the Freaksville label. Miam Monster Miam is the alias of multi-talented Belgian troubadour Benjamin Schoos who, six years on, is using the label to release his own début album, China Man vs China Girl.

Schoos describes Freaksville as a “musical village… of Belgium mutants” who are, essentially, a “family of French music lovers”; their list of artists stretch from Man From Uranus to Mademoiselle Nineteen, while those who have collaborated include Chrissie Hynde and Mark Gardener – and both of them feature on Schoos’ début.

The album starts on a short instrumental, High-Flying Melancholia; though only 50 seconds long, it sets the tone for the rest of the album perfectly. Swooping background synths overlaid with a drawling saxophone almost drown out the unmistakable thump of a heartbeat and it feels a bit like a loss when it’s over. The sound is one you could listen to indefinitely on a loop; a little bit droning and hypnotic, but with a tinge of excitement. The sax is definitively ’80s, but it’s not unwelcome; in fact, it could really be made use of more throughout the album, which could occasionally benefit from the swooning drama the instrument provides when it pops up to steal the show.

Je Ne Vois Que Vous (“I see only you”), featuring the vocals of Stereolab‘s Laetitia Sadier, is the first full track to jump out on the album. A lush four minutes consisting of racing strings under Sadier’s sultry tones, the track is undeniably French. You can’t help but envision the streets of Paris, a Polaroid camera and a girl in Breton stripes, probably shot at an odd angle and caught laughing unawares. The strings are dramatic enough that the track doesn’t feel empty or aimless, however, and even if you don’t understand what’s being sung here, you can still capture the story through the music.

Catch, the sixth track on the record, is French in a very different way. Sleeker and glossier than what’s gone before, it has the sort of stylish sheen that would have fitted right in on the soundtrack to Catch Me If You Can; or, for a more French connection, perhaps the Pink Panther films. There’s certainly a noir element to the music, here; Schoos’ voice sounds deeper and thicker than before and the brass notes are just light and sparse enough to make the sound retro, rather than obnoxious. Jazzy piano trails and West Side Story finger-snaps keep the music upbeat and cheerful; a good contrast to some of the previous songs.

Le Combat, closer to Je New Vois Que Vous than Catch or High-Flying Melancholia in its purely pop sound, is probably the last stand-out track on the album. More dizzying synths and smooth French vocals evoking images of early evening and dancing, though with none of the darker, chocolate-smooth depth of Catch, make it an enjoyable pop song.

Strangely, the collaborations on this album don’t seem necessary; Laetitia Sadier’s is perhaps the only vocal which doesn’t feel a little shoehorned in. Despite the heft of Chrissie Hynde’s name, the track on which she features drags and has none of the pop fizz the highlights of the album showcase. It could be that, this being Schoos’ début, what we really need to hear is rather more of Schoos himself, rather than Schoos the producer and creator of an indie record label. And yes; more of that sax.