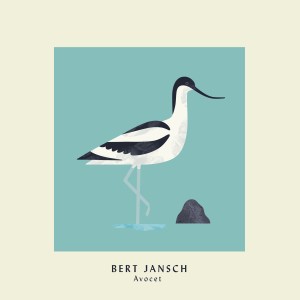 Bert Jansch is one of folk music’s greats and his untimely death five years ago means the loss of an unassuming genius of the guitar. One of the founding members of folk-rock giants Pentangle (along with Danny Thompson) his formative years spent busking through Europe to Morocoo saw Jansch soak up a host of styles that he subsumed to make his own. Cited by artists including Nick Drake, Jimmy Page, Fleet Foxes and Bernard Butler as an influence, his clean finger plucking style, disregard for conventional time signatures and unusual chord voicings earned him many fans.

This stylish re-issue of fan favourite Avocet was recorded some 25 years ago in Denmark at the height of punk in England, with a band including Thompson (on double bass) the late Martin Jenkins (violin, flute) and Jansch (guitar and piano). Avocet is the sound of an elusive maverick following his vision for music not concerned with commercial success, free from fashion and fuss.

Despite the ‘bird theme’ and titles of these tracks, this is no ‘Springwatch goes to the disco’ album or even a British Sea Power ‘twitchers in jumpers’ piece. The album hangs together with nary a replicated tweet or vocals to describe the birds; it can be enjoyed purely for what it is, a crafted piece that transcends time and place with its rustic charms.

It takes flight (ahem) with the luxurious 18-minute title track Avocet, inspired by the traditional song The Cuckoo, where the singer relates his desires to gamble, to win and regain love’s affection. It sees a massed array of styles caught up in one piece; moving from spaciously plucked Jansch guitar to throngs of heady double-tracked violin, the piece is an open sky, shimmering clearly and beautifully. There are so many different movements and textures to be unpicked from this rich and giving tapestry. Sprightly folk leads into some psychedelic movement then an almost mediaeval turn before descending into a jazzy haze and resolving back where it began.

Breathing space after this epic flight comes in the shape the brief piano piece Lapwing, which has an air of melancholy in the heavy chords set against the lighter trills of melody similar to the work of Nils Frahm, while the autumnal Bittern comes on like some phased blues-rock Nick Drake set amidst Thompson’s familiar double bass runs with some ripe and funky Janschian licks threatening to take flight into some other sphere. It is utterly riveting. The sparse but upbeat Kingfisher bears double bass and soaring violin as its plumage and sound like the laidback swinging folk of John Martyn plucked straight from Solid Air, while Osprey finds soaring violin doing battle with guitar flourishes and some frantic chord work. Album closer Kittiwake takes a calmer but by no means less intricate ending, bringing Avocet not to an end, but to one possible conclusion.

This is a gracious album that repays every visit, and it has received the stylish re-issue it so keenly deserves. Don’t dismiss it as a relic of jazz-folk noodling or self-indulgent jamming, for Avocet is a thing of beauty; clean, precise and crafted, yet loose and organic, flowing freely. And if you let it in, you’ll soon be under its spell.