Best Coast – The Only Place 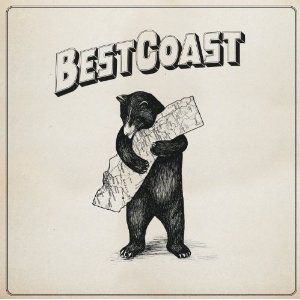 From Los Angeles, Best Coast burst onto the music scene in April 2010 like a ray of sunshine through the clouds. Which might sound like a cliché, but is almost entirely true in their case; their music is steeped in the atmosphere of their city and perfectly embodies the LA sunshine. Their brand of pop, too, takes its lead from garage and lo-fi and this was abundantly clear in their début album, Crazy For You.

Bethany Cosentino is the vocalist of the duo (the other half of which is Bobb Bruno) and her voice, though sometimes distorted by reverb and masked with the scratchy lo-fi sound of the tracks, immediately displayed a strong, distinctive sound; both clear and sharp, but smooth and soothing, too. Hearing her croon on the subjects of love and heartbreak was a harmonious blend of nostalgia, angst and wistfulness.

Their second album, The Only Place, is a beautiful maturation of Crazy For You. While the latter leant towards the emotions of teenagers – single Boyfriend being a perfect example, whilst also arguably being their best-known song to date – The Only Place shows a move into adulthood. The topics of love and uncertainty are still there, but there is also more of a focus on happiness of self and identity. The sound, too, is more mature; Cosentino’s voice comes into its own on this record without distortion, displaying gorgeous harmonies and swooping fluidity.

The first two tracks on the album are also the first two singles; title track The Only Place and Why I Cry. The Only Place is like an alternative national anthem specifically for California, boasting the beauty and joy of the state. Cosentino repeatedly asks “why would you live anywhere else?” and listening to the descriptions of the lifestyle, it’s difficult to come up with an answer. Her wonderful claim that they are “born with sun in our teeth and in our hair” seems to sum up the entire ethos of Best Coast as a band; no, life isn’t always sunny, and their lyrics prove that, but as people they are sunny, and that’s where the music comes in.

The composition on this album, too, has progressed from Crazy For You. The mixture of harmonies, guitar melodies and riffs are more complex and they add another level to the previously simple, surfer-rock sound. It’s still clean, possibly more so in some ways, as the sound is far more polished, but there’s an added interest that appears sometimes, between vocals, in the layers of the music. Songs like How They Want Me To Be have sparse but textured tiers that spice up the ’50s-style, gently rocking ballad.

As a whole, the album is put together very well. The tracks lead on well from each other, the sound gradually changing and morphing throughout, but still keeping remnants of previous songs to make the changes seamless. You only realise how drastic the change really is when you listen to The Only Place – a sunshine pop song – back to back with Up All Night – a heartbreaking ballad about loneliness. The one unchanging element is the off-beat, oscillating rhythm that characterises almost every Best Coast track.

Most of all, however, it’s the lyrics that really draw you in. Every song has a slightly different variation on a theme and Cosentino really makes the message speak, straining out phrases such as “I’m still alone, I’m still awake, I’m still afraid” or, “to go back in time, make what’s wrong feel right”. The words are relatable and her sugar-sweet voice can make them all the more heartbreakingly familiar.