The Very Best – Makes A King 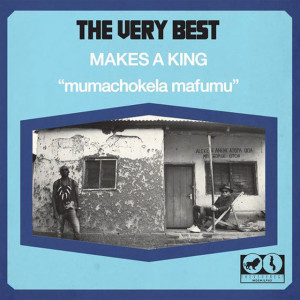 Afrobeat is a well-established and seemingly well-understood genre, although not without its potential snags. The sound initiated by African musicians like Fela Kuti caused ears to prick up in the West, and now Afrobeat is associated with the likes of Paul Simon and Peter Gabriel as much as it is with genuinely African music. Hanging half-on, half-off the world music shelf, the white Western Afrobeat manifestations of the 1980s sometimes feel uncomfortably close to cultural misappropriation, in spite of their good intentions and joyful sound.

In name only subtly different to Afrobeat is the newer style of Afrobeats – with an S. This fusion style, which mixes African rhythms with hip-hop and dance music, is not quite authentically African, but it doesn’t pretend to be. It’s a diasporic product of multicultural London, created by African migrants, and their children and grandchildren.

As for The Very Best, they are on one level a combination of the two; on another level something else entirely. A collaboration between Malawian singer Esau Mwamwaya and London-based production duo Radioclit, they make music that feels simultaneously closer to regular Western pop than Afrobeat or Afrobeats, and closer to the Warm Heart of Africa – the title of their first album proper. They’ve collaborated with second-wave white Afrobeat group Vampire Weekend, but also work with A-list African musicians like Baaba Maal.

The trans-national project hasn’t been without its hitches. Although the group formed when Mwamwaya was living in London, visa issues have made left him unable to travel to the UK recently, but these have fortunately been resolved in time for The Very Best to tour their third album. Their last record, MTMTMK (the initials apparently stand for ‘More to Malawi than Madonna’s kids’) took their sound in a synth and beats-led direction, but in Makes A King the band use fewer and at times a more traditional sound.

This is never more apparent than with the a capella Bilimankhwe, in which Mwamwaya teams up with Malawian group Jerere. At the other end of the spectrum are the two songs which feature contributions from rising South London producer Seye, who they also worked with on MTMTMK. Mariana is an infectiously upbeat track that layers vocal harmonies over a house foundation. The Dead and the Dreaming is more striking and subtle, with an irregularly pounding beat and muted vocals, some of which sound as though they might have been lifted in from a dubstep track.

Lead single Let Go is closer to an indie pop song, with spiky guitars that recall Orange Juice, and something of a Vampire Weekend vibe: it’s no surprise to learn that Vampire Weekend’s bassist Chris Baio plays on the track. Sweka might just be the best song here, with funky organ and percussion grabbing you from the outset. Mwamwaya’s lilting vocals then come in, as does a cantering bass groove and a solid house beat. Classic Afrobeat guitar sounds complete the experience. Kanyale is bold with its tribal beats, and Umasiye is anthemic with powerful contributions from Baaba Maal.

From their beginnings making mixtapes that sampled M.I.A. and Cannibal Ox, to the solid MTMTMK, The Very Best have always been a uniquely exciting group, playing music that seems to convey the many contemporary strains of African music while adding their own distinctive twist. Makes A King takes it up a notch: the same ingredients and patterns are there, but The Very Best now sound much more like a fully operational band, rather than a fortuitous hodgepodge of singing and sampling. But that homemade mash-up feel was always part of their charm – and indeed part of their history – so it’s pleasing to hear that they haven’t completely left it behind.

The Very Best MP3s or CDs

The Very Best on Spotify