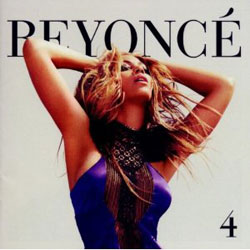 Who are Beyoncé’s peers? Lady Gaga has a stranglehold on the teenyboppers, the gays and the art-school drop outs. Rihanna, despite her consistent hit-making, seems forever stuck in the second tier. Ke$ha is Ke$ha, Katy Perry is Katy Perry, Mary J Blige is long past her prime, and Erykah Badu has evolved into something of a distant hipster icon. That leaves Beyoncé, a pop singer in the most traditional sense, usually safe-for-work and never ambiguous.

Her records and songs will never be mistaken as scene-friendly, yet still, the whole world, regardless of distinction, from Glastonbury to Pitchfork, pays attention when she releases a new album. She’s the queen of pop, universal, ranged, and refreshingly non-provocative – with a consistent knack for year-defining tunes. And 4 might be her most impressive collection yet.

Beyoncé announces her return with 1+1, a love song of love songs. Its direct, conclusive purity could be a culmination if the woman wasn’t only 29. Lyrically she references Sam Cooke while sonically she calls back to Otis Redding, Prince and U2, but vocally she is simply Beyoncé, stealing the stage and our ears with mainlined performer’s elegance. The guitar swells into a cresting solo, the piano’s undercurrent doubles over itself in drama; the whole thing could’ve been contrived if she didn’t sound so honest, so emotionally sincere – which is quite a feat for one of the most famous people in the world, especially when she’s ostensibly singing about Jay-Z.

It’s a showstopper that the singer wisely doesn’t try to follow. The next 11 tracks on 4, while still dealing with heady issues of monogamy, never aim for the chest in the same way. Instead we get the schizo-soul of I Care, placing Beyoncé’s voice over a rumble of primordial thumps. The desperate I Miss You is even more bare-bones, her voice in a half-whisper as she reveals the titular truth. Party and Countdown returns to Sasha Fierce irreverence, the former pairing the singer within the hit-churning company of Kanye West and Andre 3000. The record is surprisingly airtight of filler for a woman who could afford to phone it in; these songs sound thoroughly meditated with a strong writing staff (anchored by The-Dream) who just manage not to overdo it. The eye of the storm is always Beyoncé, the beats a mere bed for her voice.

4 is also a bit of a throwback. Although a few synths appear here and there as texture work, the record dodges the current chart-wave of beefy house pulses and electro-surge bridges. Instead Beyoncé is singing over brassy soul and understated studio-pets – it’s rare to see a pop star craft a headphones experience, much less invest much interest in crafting a cohesive record. 4 arches through the trials and rewards of a long-term relationship; not that it’s a concept album or anything, but the linear strain through the songs is obvious, even to a passive listener, rather like classic works of R&B from the ‘70s, ‘80s and ‘90s. We should be happy that a superstar is still committed to delivering quality LPs in an environment that frowns upon such commercially unwarranted traditions, but we should be especially grateful that that superstar is Beyoncé.