by Martyn Young
published: 11 May 2016 in Album Reviews
Tweet 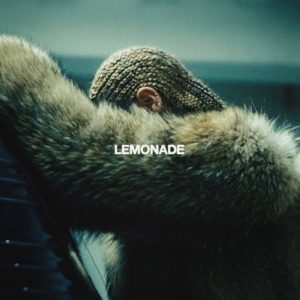 Beyoncé’s fifth album, 2013’s Beyoncé, set a pinnacle for surprise releases but it also saw the singer not only subvert her method of release using the concept of the visual album for the first time but also subvert her entire method of working. It was the sound of a musician making a firm, loud and clear statement that from now on anything goes, and she was going to explore the full realm of an increasingly experimental yet dazzlingly pop tuned musical desire. The result was a triumph, fostering an almost breathless excitement that now welcomes Lemonade, her second successive rush release and visual document.

Lemonade is just as startling and impressive but comes from an altogether different place both sonically, spiritually and emotionally. Beyoncé has always been a performer in the truest sense. Someone who hides their true emotions and feelings behind the desire to put on a show. Here though, her thoughts, feelings and internal dilemmas are laid bare. Despite her creation, back in 2008, of Sasha Fierce to channel character stories through, it would be difficult here to come to any conclusion about the overarching theme of the record other than as a document of relationship trauma, and the full gamut of emotions and contrasting feelings that entails. Of course, only Beyoncé and her equally high profile and successful husband Jay-Z know the true story of their relationship, but throughout this album, the hints of possible infidelity or a previously unbreakable bond rupturing hang heavy.

So, Lemonade is the sound of Beyoncé forcefully and confidently putting forward her side of the story. She is angry, playful, scalding, brash, arrogant, and finally, forgiving. The impressive visual accompaniments of the story aside – a one-hour film was screened on HBO and is downloadable as part of the album package – the saga told in the songs is compelling enough on its own. The album begins with the soul baring, gently stirring Pray You Catch Me, and it’s clear from the jaw dropping opening line that this is a Beyoncé album like no other: “You can taste the dishonesty, it’s all over your breath as you pass it off so cavalier.”

Second track Hold Up is also an exploration of relationship trouble, and seems explicitly directed towards her husband with the pointed use of the classic lyric from Yeah Yeah Yeahs‘ Maps subtly altered courtesy of Vampire Weekend‘s Ezra Koening: “Hold up, they don’t love you like I love you.” The lilting Caribbean bounce provided by producer Diplo gives the song a wonderfully woozy, disconcerting quality. It’s a trick that’s employed throughout the album as the singer juxtaposes deep reflection with outlandish, odd and often brilliant pop hooks.

Perhaps the best thing about Beyoncé in 2016 is that no one else on the planet sounds like her. She is a cultural and musical force of nature. The lyrics on this record are rich and particularly evocative and the vocal and musical accompaniment has gravitas to match. Don’t Hurt Yourself is particularly stunning, with the singer going to a dark, brooding and incendiary place and bringing her own brand of fire to such an extent that guest (and co-writer) Jack White is rendered irrelevant, at least in the performance. Indeed, most of the many guests on the album, including James Blake, Kendrick Lamar and The Weeknd, are mere footnotes. To focus on their contributions would be a disservice to the singer who provides the musical vision and strength of performance to take things to another level.

As the album reaches its conclusion, All Night provides redemption as Beyoncé proclaims: “Our love was stronger than your pride/beyond your darkness, I’m your light.” This song represents the light at the end of a tunnel of darkness, the possibility that love and trust can once more blossom. Following this emotional outpouring comes final track Formation, the album’s pure pop banger and Beyoncé’s response to the Black Lives Matter movement. It’s a fitting conclusion to the album. With all matters of the heart explored in extremely intimate detail it sees Beyoncé back on top of the pop world ready to slay like only she can. Her musical competition – and just possibly her husband, too – have been suitably chastened.