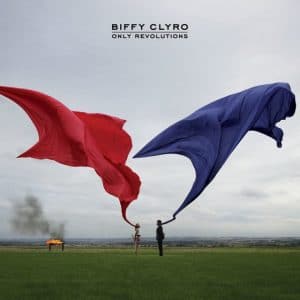 Only Revolutions is a battering ram of a record. Biffy Clyro, on their fifth album, have traded in all the unfocused noise and fuzzy aim of their early work for arena-ready, all singable, all danceable rock ‘n’ roll with an extra sheen of polish, just in case anyone wondered about its radio-friendliness.

The sound this time round is something between Jimmy Eat World‘s brawnier, heavier stuff (though Jimmy never came up with a riff as gutsy as the opening measures of Cloud Of Stink) and that other big-stage prog-rock trio, Muse. But strict comparisons need not apply: Simon Nell and the Johnston twins are doing their own thing, emitting genuine emotion and radiating an energy that harkens back to the days before grunge weighed everything down. That said, given the choice between raw heart-on-your-sleeve emotion and all-out muscle, Biffy trend toward the latter.

On the explosive album opening one-two attack of The Captain and That Golden Rule, the Ayshire trio demonstrate that they are, after years of toiling and building a fan base, ready for greatness. On The Captain, Nell sings, “I gave birth to a fire. It’s like it’s features were burning. I’m in control; I am the Son of God,” with over-the-shoulder conviction amid a wash of jagged guitars and a staccato horn section, and the metaphor, bullheaded as it may be, is brash enough to match The Captain’s sonic attack.

On the bouncing, strobe-washed dance tune, Born On A Horse, Nell sings perplexingly, “I pronounce it ‘aluminium,’ cos there’s an I next to the U and M,” and, “I’ve never had a lover who’s my sister or my brother before.” The lyrics are confusing and bizarre, often violent and awash with blood and gore, as on the scraping Shock Shock: “Well, you scratch and you scratch, ’til your face comes away, replaced by a hole… I commend your violence.” And while listening too closely for meaning may inspire head scratching and shoe-gazing, the music speaks for itself.

The album does have a few quieter moments, and they serve as necessary counterpoint to all the pyrotechnics. On God & Satan, Nell sings, “I talk to God as much as I talk to Satan, because I want to hear both sides,” over something not unlike a backwards reimagining of Leonard Cohen‘s Hallelujah.

The standout track here is the stunning single Mountains, which bounces along before breaking into a half-time, lighters-raised arena chorus, on which Nell sings, “I am a mountain, I am the sea,” in front of a lock-armed choir of fellow revellers. The guitars here are as biting and heavy as anything on any Smashing Pumpkins record, and the bald appearance of such a comparison should indicate something about Biffy’s musical scope.

They’ve been called prog-metal and nu-metal, and they’ve been even been compared to American pop-punkers Blink 182. All of this may or may not have been accurate at some point, but the fact is that Biffy Clyro are capable of shaking any comparison in favour of chasing the sounds in their heads. Does this mean that with Only Revolutions they’ve turned their back on the very cult following that have allowed them to continue? Hardly.

We see here another step in a fantastic band’s hard-slogged evolution, and if you haven’t been a Biffy cultist for years – or if you’re not savvy enough to claim that you, indeed, have been with them since you first heard Blackened Sky at a house party – now’s the time. Only Revolutions is just the kind of record to turn a cult following into a fair market share of the collective rock ‘n’ roll unconscious.