by Lauren Down
published: 5 Sep 2011 in Album Reviews
Tweet 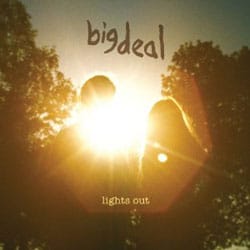 Big Deal are the latest shoegaze-inclined boy/girl duo to release an album that deals in hazy, bruised, romantic numbers. The transatlantic collaboration between London born Alice Costelloe and California native Kacey Underwood draws on the same laid back nostalgic American ambience as Best Coast, Tennis or even Cults but their distinctly teenage perspective offers up a particularly limited collection of songs.

Billed as ‘anti-twee’ for their guitar-driven, stripped back grunge aesthetic the pair have emerged with a debut effort whose subject matter is, rather unsurprisingly, nothing short of twee. Homework, for example, is a simple blend of sweetly strummed guitars and tenderly overlapping voices that see Costelloe confess that her school-girl crush is “ruining [her] grades.” Having started out in the fresh-faced indie quintet Pull In Emergency when she was just 14, Costelloe is still a very young talent but with more experienced hands to guide the song-writing process it is a shame that, as with many of the tracks on Lights Out, the endlessly repeating vocal hook renders an already tired melody unbearably dull.

Carried on nothing but two guitars and the occasional generated sound, the album’s simple confessional nature doesn’t automatically result in a dull listen though; album highlight Chair suffers from a similarly repetitive refrain but it is here we find one of the most insatiably catchy melodies you are likely to hear this side of the summer. The same can be said for previous Moshi Moshi single Talk whose momentous electric guitar driven rhythm and angst ridden, bitter growls seems to effortlessly inhabit a space other bands populate with richer, more intricate arrangements.

Costelloe’s sensual, smoky vocals certainly add a more aching, tempestuous slant to uneasy, vulnerable numbers like Cool Like Kurt and Locked Up, permeating them with a tangible sense of sadness and longing. An album that rarely leaves the subject of unrequited love, the bedroom and age differences certainly adds whispers to the rumour mill where the pair’s relationship is concerned, although they assuredly assert that the awkward, shy emotional narratives are just something that came from a shared writing process.

Subtle shifts in the soft timbres and forlorn palette of Lights Out become most apparent as the album draws to a close, where numbers like Summers Cold see Underwood take a noticeable vocal lead for the first time and the intimate, more mature dynamic contrasts with the melodramatic teenage daydreams of earlier tracks.

An uncomplicated and perfectly pleasant record, swirling with some instantly intoxicating ’60s inspired pop numbers, Lights Out finds itself running at the same, ultimately tedious pace for 12 songs. It seems that Costelloe and Underwood have already said it best themselves: “We’re sort of envious of a certain time when people were writing 40 or 50 years ago – they could say things and not have to think about whether they’d been said before.”