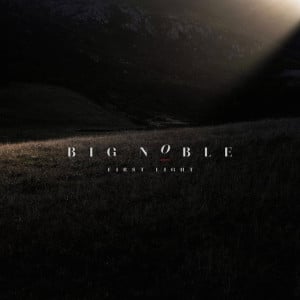 It is probably completely unfair, but the job title Sound Designer does have a certain air of exaggerated importance hanging round it. Like Vice President In Charge of Distribution (Chinese Imports) actually being the poor sod charged with making the tea. But anyway, Big Noble is what happens when you take a sound designer (Joseph Fraioli), you give him Interpol’s guitarist (Daniel Kessler), and you then make a concept album based around New York.

As a pair, they’ve got some quite significant history. Fraioli, in addition to his sound designing exploits, is also an actual musician working under the name Datach’i, who in 1999 signed to the label Kessler was at the time working for.

First Light consists of Kessler playing, Fraoli recording and then manipulating the results. In some ways, it sounds unsurprisingly quite like what you might imagine Interpol would be shorn of everything but Kessler. So the cosmopolitan, icily chiming guitar which helps make Interpol so Interpolian is frequently on display.

Although it’s mostly fainter and more shrouded. It’s all very dystopian, all very monochromatic and heavy with a creeping, enveloping atmosphere. The opening Ocean Picture has a searching, melancholic weight to it, slowly unfurling like an elderly giant morosely attempting to get out of a particularly treacherous bean bag, before the first of many Kessler arpeggios rings ominously in the distance.

Atlantic Din adds a disembodied voice (announcing the latitude and longitude of where it was recorded) before slowly sinking into another textured bed of throbbing noise, upon which a rising tide of fractured and distorted guitar brightly rises, before everything just sinks away to leave that robotic voice once more intoning.

No doubt, this is cinematic, evocative stuff. You can see how Fraioli has made his name in the worlds of film and advertising and it’s also a reminder of how instantly recognisable Kessler’s guitar playing remains. But, while First Light is a nice accompaniment to doing something else, judged in a vacuum it just feels like there’s something missing.

Particularly in the later half of the album, there’s a frustrating sense of things evaporating just as they’re getting interesting. Pedal emerges with a new-born fragility, before expanding and blossoming into something vast and cavernous, into which Kessler offers up another precisely honed riff and expectation rises. But it then just slips softly away in slightly unsatisfying fashion.

It is a pleasant, meandering experience, but not a moving one. Great soundtracks can exist on their own terms – look at Ennio Morricone filling out stadia – and can work without any other stimulus. First Light doesn’t, quite. Instead, it’s more like a good score in search of a great film.