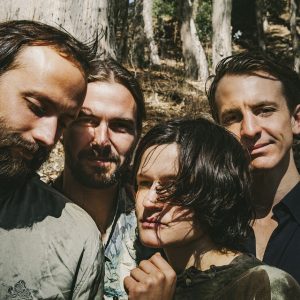 With their third album UFOF, Big Thief have already released one of the best albums of 2019. A prog-folk album boasting some serious hooks, it saw the New York based four-piece elevate their recognition levels. In the middle of the supporting UK tour – which had already included a sell-out show at London’s Roundhouse – they announced a 2020 gig at the considerably bigger Hammersmith Apollo. Their momentum was not slowing. Unexpected however was that, just five months after the release of UFOF, its follow up would appear. With the release of Two Hands, the question of course is: Can they be contenders for album of the year twice?

The short answer is no, although there is definitive progression in evidence. They appear to have purposely made a clear commitment not to release UFOF Part Two, and evolved their sound accordingly. Two Hands, billed as UFOF’s “earth twin”, doesn’t follow the familiar new folk of the last album so strictly, allowing exploration beyond its sound template.

There are two key differences in musical styles in evidence. Firstly lead singer Adrianne Lenker’s voice is more prominent in the sound mix, which has largely moved away from the hushed stylings of its predecessor. Lenker, it seems, has taken confidence from Big Thief’s increasing success, and stepped assuredly up into a leading role.

The second major difference to the sound is that someone has realised how powerful the guitar is in the band’s live performances and, as a result, guitarist Buck Meek feels like he has been quite unleashed on this record. This brings out a sound reminiscent of mid ’70s Neil Young thundering through the mix. The combination of the two means the material is still recognisable as a collection of Big Thief songs, but it shows a real expansion of the band’s capabilities, even if this comes at the cost of consistency, which was an absolute selling point of UFOF.

The album starts with Rock And Sing, which could give the feel of familiarity, being hardly out of place playing after Cattails, but Forgotten Eyes instantly gives the sense of how this album will go: drum intro, big band sound and vocals straight to the front, loud and proud. Shoulder starts with a rock riff, with harmonic vocals leading through a really solid song. This is followed by Not, a song where, mid-point, Lenker’s voice almost cracks as passion flows through. It is one of Big Thief’s finest moments on record so far, lyrically and musically a stunning highlight of the album.

Two Hands is a good album, albeit one labouring under a slight sense of anticlimax given what has gone before. What could have been if they had stylistically mixed both albums together? We may not ever know, but it sets up massive anticipation of what could be coming next.