by John Murphy
published: 3 May 2019 in Album Reviews
Tweet 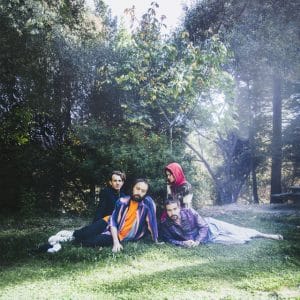 Instead, the New York quartet have eased the tempo down, made the arrangements even more frail and spartan than before and created a ghostly hush of an album. It’s an approach that works very well – the songs are even more beautifully written and performed than before – and results in a record that sounds both reassuringly warm and familiar while maintaining a somewhat eerie air.

Both of those qualities can be heard in opening track Contact which starts off calm and fragile until, just before the end, lead singer Adrianne Lenker erupts with the sort of scream you’d associate with an actor in a horror film. It’s representative of UFOF as a whole – that warm, gorgeous sound ebbing and flowing like a river, but with the threat of a dangerous eddy always there to pull you underneath.

Many of the songs gathered on UFOF were recorded as live, such as the infectious Cattails, all finger-picking guitars and lush harmonies. It’s one of those songs that immediately pulls you in like a enormous hug, appropriately enough as Lenker is singing for a friend in the grips of a depression (“you don’t need to know why when you cry” runs the chorus).

Lenker’s solo career is also revisited on UFOF with a re-recording of 2018’s Abyss Kiss, a compulsive, if harrowing, highlight. Lenker’s voice is genuinely affecting, catching with emotion as she sings of sexual assault (“My dog barking loud, couldn’t tell for sure where the screaming sound was coming from”), while James Krivchenia’s hushed percussion adds some almost imperceptible muscle.

Sometimes there are nods to Bon Iver‘s For Emma, Forever Ago, as on the beautiful Orange, simply built on an acoustic guitar and Lenker’s vocal. Even on a relatively upbeat track such as this though, darkness is never very far away: “fragile is that I mourn her death, as our limbs are twisting in her bedroom” run the rather downbeat closing lines.

And then, just as you feel you’ve got the measure of this album, comes something that can only be described as rather funky as the infectious bass of Strange kicks in. It’s Lenker at her most surreal and unsettling, talking of “the silkworm’s rage”, “the lung moth cry” and “turquoise lungs”. That’s turned up a notch in Jenni, full of portentous guitars and distorted vocals are Lenker sings “Jenni’s in my room” – it builds up and up until guitarist Buck Meek is simply striking the same chord over and over again. It’s a breathtakingly powerful moment.

This all may be too intense and striking for some people (the last 70 seconds of closing track Magic Dealer are simply ambient noise), and those who were pulled in by the warm sound of Saddle Creek on the band’s first two albums may find this switch to 4AD to be too jarring. Yet, for most Big Thief fans, UFOF is a natural, welcome progression, and one that you likely won’t want to tear yourself away from.