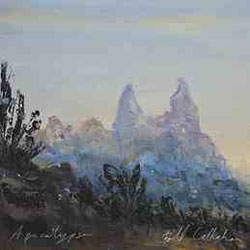 Whether he’s recording under his own name, or as Smog, or, with yet more archness, as (Smog), Bill Callahan has always been a slippery character. He has recognisable traits, particularly his laconic delivery and the imagery that populates his lyrics. Yet each album tends to assume a life of its own, usually entirely unrelated to the character of its immediate predecessor. For a while, in spite of his unwavering consistency, there was a strong sense that he might have peaked (Wild Love and Knock Knock having been particular highlights of his massive discography), but then came Sometimes I Wish We Were An Eagle, a rich, eloquent and superbly arranged album that was right up there with his best work. In light of that achievement, Apocalypse does feel like something of a retrenchment, its spare, unadorned style and tetchy, obtuse songs bearing all the standard Callahan hallmarks. Callahan is never anything less than consistent, however, and Apocalypse has an identity of its own.

Apocalypse is certainly less accessible than its predecessor, perhaps even wilfully so. Its songs, usually built over limited, carefully selected chords, require close attention. It is almost as if Callahan has consciously imposed some very specific limitations upon his writing. There are occasional hints at the broader arrangements of …Eagle – a hint of woodwind here, or a delicate string entry – but they never seem like more than conversational interjections. Another strong characteristic is effects-laden electric guitar, which creates a strong sense of danger. Callahan has described Apocalypse as a more inward looking record – a statement certainly borne out in how the music is arranged and in how it sounds. Apparently recorded live, it certainly has a rustic ensemble feel – but the effect to which the ensemble playing is directed is decidedly introspective.

That being said, these songs do have a sort of relentless intensity. Themes are stated and repeated and themes developed in unexpected ways. The opening Drover boldly contrasts the herder and the experience of the herd. Even more bizarre is America!, where given Callahan’s style and form, it is difficult to know whether the intention is earnest or ironic. It’s almost a clarion call for patriotic spirit in songwriting.

Apocalypse is such a strange, slippery collection of music. A track like Universal Applicant appears to be largely about textural contrasts – brushed drums and reverb-laden guitar in the manner of Bill Frisell one minute, and then skeletal studies over one note the next. Callahan’s vocal delivery is at its most languid and forlorn. Baby’s Breath is spare and considered, whilst Free’s feels like a subtle, understated philosophical rumination.

By way of contrast, Riding For The Feeling and One Fine Morning represent some of Callahan’s most direct and affecting writing. These are deceptively simple, gentle songs that grow in impact over repeated listens and with a warmth that undercuts the sense of doom and drudgery elsewhere. There is a strong sense of liberation, enlightenment and acceptance in Riding For The Feeling. The phrase ‘my apocalypse’ – representing a pile of demos on a hotel bed – is made to sound more like an epiphany.

Perhaps Callahan’s obsession with imagery surrounding horses, or even nature more widely, is getting a little tired now. Riding For The Feeling and One Fine Morning at least capture the wide open spaces of the Western – both in their awe inspiring beauty, and in their harsh, unforgiving nature. Much of the rest of Apocalypse is more philosophical, perhaps even solipsistic.