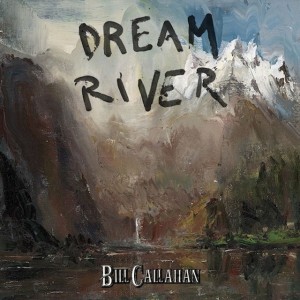 The last time we heard from Bill Callahan, the end was nigh, and what seemed like the final message to our doomed world was laid out in his gritty and bleak album Apocalypse. Luckily for us, we’ve all survived. But unluckily, this close shave with death has prompted a somewhat misplaced joyous outburst of salvation, which is duly chronicled on Dream River. And after all those heavy threats of obliteration Callahan seems almost downright happy most of the time, despite impressively dropping the word ‘armaggedon’ with some force into the second track Javelin Unlanding.

Because let’s face it, the American troubadour formally known as Smog is at his best when he’s mulling something over that is deep and certainly troubling – the kind of thoughts that just don’t naturally cosy up with a bongo drum. This includes much of the album A River Ain’t Too Much To Love and certainly all of Apocalypse. But this uplift in mood is clearly evident on the first half of Dream River, Callahan’s fourth album as, well, himself. And while we should expect Callahan to be a man of many moods, the Maryland-born singer strikes a path into could unkindly be referred to as bordering on soft rock. The plain ditty of Small Plane, with Callahan’s refrain of “I’m a lucky man”, is so soft it’s almost luxurious, like a high-thread count Egyptian cotton blanket. There’s further evidence of this change of tack with the “wind that’s pushing the clouds along”, on the cliché-tempted Spring.

Yes, it’s still Bill. His rambling word associations, droll lyrics and killer electric and/or acoustic guitar licks are still present. But this is quite a subdued Bill when he offers to share too much of the stage with the unusual bedfellows of a meandering flute and a dry little congo. It recalls his first-ever non-Smog release of the Diamond Dancer EP, often referred to as his funk-and-western period. And here we are again. This time around he namechecks Marvin Gaye (where on Apocalypse it would have been Johnny Cash getting the shout out) and invokes the kind of breezy slickness perfected on the recent Iron And Wine album Ghost On Ghost.

But work your way past the rather saccharine opening four tunes and you’ll find a gem at the heart of the album. As a musician who’s clearly demonstrated his qualifications as a student of American folk and blues, he crafts his own dirty blues tune Ride My Arrow, complete with a swaggering wah-wah guitar riff. And just like John Lee Hooker’s legendary My Father Was A Jockey, he sets up all of the double-entendres early on of birds of prey and arching arrows in the sky. Except it’s not about sex; it’s about war. The eagle and the arrow surely suggest the Great Seal of the United States depicting the bird with 13 arrows in its left talon, as well as the Aesop’s Fable of the eagle and the arrow as he sings: “The land I love is splitting in two… again… and again… war muddies the river, and getting out is dirtier than getting in. Ride my arrow…”

Or as Aesop told it: “An Eagle was soaring through the air when suddenly it heard the whizz of an Arrow, and felt itself wounded to death. Slowly it fluttered down to the earth, with its life-blood pouring out of it. Looking down upon the Arrow with which it had been pierced, it found that the shaft of the Arrow had been feathered with one of its own plumes. ‘Alas!’ it cried, as it died. We often give our enemies the means for our own destruction.”

It’s a truly breathtaking piece of songwriting and musicianship over what seems like an epic five minutes from Callahan. He effortlessly carves the entire narrative out of just one incendiary and shimmering guitar line which combines to stunning effect with his own breathy baritone. And whatever misstep he makes before, as well as after, on Dream River this is the tune that makes it all worthwhile.

What follows isn’t so much plagued by the MOR jaundice of the openers. But the final three tunes do suffer from a real sense of anaemia after following such a weighty song. They all eclipse the five-minute mark and are meaty enough. But with the lightweight numbers up front and the centrepiece dominating the lacklustre cast around it, the album is surely one of the most uneven and unsatisfying in recent memory from Callahan. It drifts painfully towards its conclusion with the aimless yet oft-repeated lyric of ‘just keep on’ juxtaposed against a dirge of folky violin, like an injured runner just urging himself over the finished line. Compare it to Apocalypse where he left the bombshell of One Fine Morning and its ‘skeleton crew’ to quietly close out the troubled album, and you’ll sense why Dream River could have been so much more.