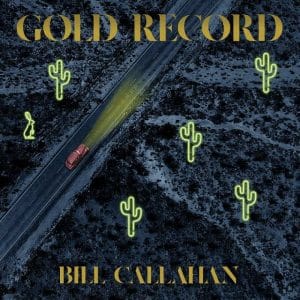 Gold Record sees Bill Callahan return with his second album in as many years, building on the success of last year’s acclaimed Shepherd In A Sheepskin Vest. He may be in the middle of a period of creative productivity but in terms of pace and overall flow, Gold Record sees him at his most horizontal as he delivers another set of unhurried, in-character narratives to luxuriate in.

Opening track Pigeons shows how he continues to be a deft, distinctive and magnetic wordsmith, as he imagines himself as a limousine driver transporting a newly-married couple to an unnamed destination. Small details of the experience are pored over and lines like “when I see people about to marry, I become something of a plenipotentiary” confirm him to still be a reliable source of pleasingly underused vocabulary. Like the rest of the album, musically it takes a meandering path, skeletal guitar interacting with dabs of background brass.

Halfway in, The Mackenzies quietly establishes itself as one of the key songs on the album, representative of the easy homeliness that gently pervades Gold Record. “I’m the type of guy who sees a neighbour outside and stays inside and hides” he sings, amid arrangements that are sparse and loosely structured yet also comforting. The moving, repeated lines at the end feel like some full of the most warm and human he’s penned to date. Protest Song sees him further build his song-based characterisations and half-stories, this time with some humorously exaggerated accents along the way (“step aside son or you’re going to get hoyyte”).

Shepherd In A Sheepskin Vest saw him address his experience as a new father and an air of contented domesticity can be found here also, most noticeably on an alternative version of Let’s Move To The Country, a song Callahan first released back in 2000 on Smog’s acclaimed Knock Knock album. Given his current circumstances it arguably sounds even more at home here on Gold Record.

Later, Breakfast starts out sounding like On The Beach era Neil Young and even begins to approach a Laurel Canyon type sound at one point, but right at the end, he suddenly cuts it off abruptly with a typically Callahanian line that simply proclaims “and breakfast is my favourite meal of the day”. The food theme is extended on Cowboy as he happily imparts “all I need is whisky, water, tortillas and beans and buffalo meat, one time per week”, as an enjoyable, lower level suspense surfaces in how he draws out his words. Like on other songs, how the lyrics sound phonetically in his august, burgundy voice offer just as much satisfaction as their meaning. There’s direct lyrical nods to Johnny Cash, Mel Tormé, Ry Cooder and Ricky Skaggs over the course of the album which help roughly sketch out where he is musically at the moment.

Final track As I Wander feels the most poignant on the album, his voice more vulnerable and exposed as he offers up lines like “the babies make me feel at ease, with eyes like honey-drunk bees”. It puts the seal on another album imbued with wisdom and sharpness of mind, undoubtedly music for the slow lane. As a writer of quasi-autobiographical songs that offer uniquely considered observations on human relationships and general life detail, Gold Record proves he’s moving into a realm of his own.