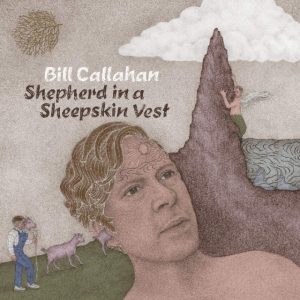 There’s something a bit disarming about hearing Bill Callahan singing about domestic bliss. This is a man who, after all, has built a 30-year career on being the epitome of the ‘sad man with a guitar’ figure: a man whose song, I Break Horses, was about the inability of a man to commit to a relationship, and whose 2007 album Sometimes I Wish We Were An Eagle is one of the truly great break-up albums of our age.

Shepherd In A Sheepskin Vest though, Callahan’s 17th studio album (including all the records he recorded under the name Smog), has been trailed as a double record full of songs about his marriage, children and general happiness. As usual with Bill Callahan though, things aren’t quite that simple: there’s no less than 20 songs here, dealing with topics as varied as The Incredible Hulk, writers’ block (this is his first record in six years) and mortality.

Musically, Callahan has settled into a gentle, almost pastoral feel, full of gently picked acoustics and dominated by that extraordinary voice. That deep, rich baritone still has the power to be impossibly moving – the beautiful Son Of The Sea is an autobiographical look at Callahan’s life: “life is change… if there is no supper, the children look to me, then to the table”. He even makes a potential sappy line like “I got married to my wife, she’s lovely” sound unbearably moving while “the panic room is now a nursery” is just the perfect encapsulation of life moving on.

Callahan doesn’t just focus on his new found happiness though. His mother died last year, and there are more than a few songs on Shepherd In A Sheepskin Vest that take a philosophical look at life. Black Dog In The Beach has a reflective, bittersweet feel to it, while When We Let Go could apply to either love or death – the slightly woozy, jazzy feel recalls Tim Buckley at times.

There’s also an easygoing playfulness to much of the record – The Ballad Of The Hulk is essentially an introspective look at Callahan’s youth and whether he should have lost his temper more. Then he throws in a line like “you know I used to share a tailor with David Bruce Banner… that’s the Hulk”, and can almost feel the wink from Callahan coming through the speakers.

Other tracks are more straightforward – writing addresses his long absence from the music industry (“it sure does feel good to be singing again”), while the lovely What Comes After Certainty is a mediation on love and commitment and what it means – “true love is not magic, it’s certainty”.

At over an hour long, this isn’t an album to dip in and out of – it’s that rare album that you have to commit to, and let it wash over you. It’s also undeniable that more than a few of the songs tend to bleed into one another: the template is a relaxed, country-ish stroll that never raises above a trot. Yet, at times, Shepherd In A Sheepskin Vest contains some of the most beautiful songs you’ll hear all year. “I never thought I’d make it this far” he muses on What Comes After Certainty. We should all be grateful he has.