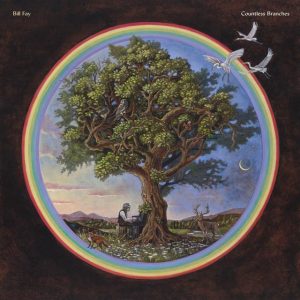 It has been a long and winding road to the release of Countless Branches for 76-year-old Bill Fay. Back in the mid ’90s the London-born singer, pianist and songwriter spoke of his belief that his eponymous 1970 debut album had been completely lost, and that he thought no one was listening to him anymore. He had practically given up on being an artist after parting ways with his label.

The re-release of his early catalogue in 1998 led to an increased acknowledgement of his work, and in the early 2000s he began to attract acclaim – and covers – from luminaries such as fellow lost-and-found songwriter John Howard, Julian Cope, Jim O’Rourke, Wilco‘s Jeff Tweedy, Ed Harcourt, Okkervil River, The War On Drugs and Marc Almond. Emboldened with newfound positivity, Fay was motivated to return to the studio for what would become 2012’s Life Is People, a piece of work described by no less a figure than Nick Cave as “a beautiful album”. Its release saw him invited on to Later… with Jools Holland. 2015’s Who Is The Sender followed.

Countless Branches then marks Bill Fay’s third album since his return, and arrives on the 50th anniversary year of the release of that self-titled debut. Here Fay sticks with the basics of a formula that has supported him well, working with a familiar producer in Joshua Henry and regrouping again with main musical architect Matt Deighton. But amongst these unchanging consistencies there are some stylistic alterations to be found.

Less is more seems to be the musical aim here. Bonus full-band tracks aside, the album otherwise sports simple instrumentation throughout. Fay here delves into his trove of compositions amassed over 40 years, but with newly written words and melodies on his recurring themes: nature, the family of man, the cycle of life and the ineffable vastness of it all. The resulting 10 songs might appeal both to long term fans and listeners who have enjoyed recent releases by the likes of The Blue Nile’s Paul Buchanan, or even the late Leonard Cohen.

At the core of Fay’s songs are voice and piano, supplemented by occasional guitar, strings and the merest hint of keyboards. Fay’s words are those of a man who can only write such material at this stage of his life. The song titles signpost the lyrical inspirations at play: I Will Remain Here; How Long, How Long; Filled With Wonder Once Again. Time’s Going Somewhere sounds as if it could have been started many years ago – it likely was – with a chorus of “I don’t know now but maybe one day I’ll know if time has a plan, has a goal”. Yet it feels at peace with the concept of time, and proudly takes its time, finishing with the lines “Time’s going somewhere, no reason to doubt it no reason at all”. The song documents the sense of uncertainty during life as younger person as seen by the older.

Love Will Remain is simpler in its use of words, with the title sung repeatedly while various obstacles and challenges are thrown at this concept (“When knowledge has passed away, when others have toiled and failed, when prophecies have passed away”). Fay’s tremulous voice imbues it all with touching emotion. It’s simple, but utterly heartbreaking – the album in microcosm. Countless Branches is just 27 minutes long, but it’s majestic. Its brevity allows the listener the chance to become immersed in Fay’s lyrical world of love, time and hope. Cave claimed that Fay is “one of the greats”. On this outing, it’s clear why.