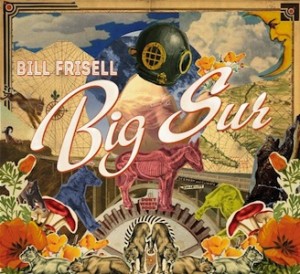 For someone who produces instrumental music that is relatively open and accessible, guitarist Bill Frisell remains a surprisingly divisive figure. He continues to irk jazz purists by writing and performing music that draws from other musical sources and languages. Similarly, though his music is deeply infused with the blues, the resulting sound is often resonant and warm rather than raw and aching.

Yet he is also one of those musicians who deceives through his apparent directness. Frisell is obviously an admirer of the art of the great pop song (he recently released an album of Lennon interpretations and there is even a provocatively titled piece here called We All Love Neil Young). His arrangements often seem minimal, relaxed, unfussy and pure – yet there is a real knowledge and skill at work here, and this can be heard in the emotional range Frisell draws from his compositions.

If Big Sur essentially sounds like a neat unification of Frisell’s disparate recent projects, that is because it is. It draws together his chamber group 858 Quartet and the Beautiful Dreamers trio in an unconventional, bass-less ensemble that shimmers, shines and, where necessary, grooves (particularly on the wonderful driving blues of The Big One). This is Frisell at his most focused on arrangement and feeling – those jazz purists are likely to remain unconvinced as the role of improvisation is further limited here. The pieces are mostly concise at under five minutes, but each has an evocative breadth and depth of its own.

Like much of Frisell’s music, Big Sur beautifully captures a sense of the American landscape – it has the feeling of wilderness, of wild open spaces, of mountain ranges. In fact, Big Sur resulted from a Monterey jazz festival and Big Sur Trust commission to respond to the California coastline, Frisell having written most of the music at the Glen Deven Ranch. It has the feeling of a strongly focused, carefully developed suite. Whilst each piece has an individual mood and atmosphere, hints of themes recur, and the pieces share characteristics of orchestration.

Trying to select highlights from such a wide-ranging, inspiring collection feels a little reductive, but there are a handful of moments here that crystallise Frisell’s entire approach brilliantly. The opening The Music of Glen Deven Ranch, as its title suggests, serves as a perfect statement of intent, an overture to the longer and grander whole. The majestic Gather Good Things begins as a subtle, delicate string feature before eventually expanding into something as vast and wide as the horizon. The Big One captures the energy and exuberance of youth, and seems appropriately inspired by the surf movement of the 1960s.

When there is call for improvisation, it is responsive and well-suited to the temperament and mood of each piece. This is evident on the blues-based approach to Shacked Up, or in the more liberated, conversational playing over the insistent, irresistible riff that underpins Highway 1. There’s also a spirit of individual innovation and informed conversation throughout the whole suite. Yet there’s little doubt that it’s the darting, imaginative wit and substance of Frisell’s written lines and intricate arrangements that really dazzle here, together with his instinctive feel for and understanding of a range of American musical traditions.

Really, this is very clever, very impressive music indeed. To execute this hybrid of near-baroque string quartet stylings, blues lines, American folk and interactive ensemble playing without any of it sounding forced is remarkable. Frisell’s unique personal style is now so established and assured that this music feels thoroughly mesmeric and absorbing. The playing, as might be expected, is consistently articulate and expressive, not least drummer Rudy Royston’s ability to make even the most steady and unwavering backbeat sound richly imaginative. The outstanding violinist Jenny Scheinman has been a key Frisell collaborator for some time now, and she remains a resourceful and thoughtful musician. The group, when all playing together, feels elemental and symbiotic.