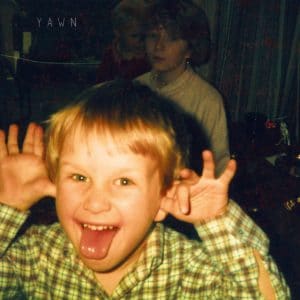 It was only with the release of 2015’s West Kirby County Primary album that Bill Ryder-Jones seemed to finally shake off his ‘former member of The Coral‘ status. After leaving the Wirral-based psych-folk-rockers in 2008, Ryder-Jones dabbled in film soundtracks and released a couple of low-key folk-influenced solo records. Then, his third album seemed to elevate him to another level.

West Kirby County Primary was a huge step forward for Ryder-Jones, recorded in his childhood bedroom and touchingly personal, while also sounding like a ‘proper’ rock album. Songs like Two To Birkenhead sounded like instant classics, and the fact that it didn’t receive even a nomination for the Mercury Prize is one of the great mysteries of our age.

The follow-up, Yawn, is a natural progression from West Kirby County Primary. It carries on drawing on Ryder-Jones’ often painful personal life (the cover photo is a childhood picture of his older brother who died when Ryder-Jones was still a child), and as the title may suggest is a low-key hour.

Yet despite the sometimes downbeat subject matter and the preponderance of brooding, stately songs, there’s the welcome presence of Ryder-Jones’ self-deprecating sense of humour. As the opening track There’s Something On Your Mind puts it: “There’s a fortune to be had, from telling people you’re sad.”

It’s true that there’s a lot of sadness explored on Yawn, but it’s unlikely to make Ryder-Jones a fortune. It’s an intense listen, not really one for background hum, and probably one of those albums that make most sense when listening on headphones in a dark room. The aforementioned There’s Something On Your Mind starts off quiet and hushed, and then gradually builds up over its five minute running into something of a cacophony of guitar noise. It’s a pretty breathtaking introduction.

Mither is an ode to Ryder-Jones’ mother which manages to merge existential dread (“I have this dream where I’m alive, and each day I forget what it’s like to be dead”), Scouse slang and a lyrical nod to Liverpudlian cult songwriter Mick Head of Shack: “‘Is right, is right’, Mick said”). It’s a song that shows how much Ryder-Jones has progressed from his first tentative steps as a solo artist – Mither is drowned in so much guitar that it could almost be a My Bloody Valentine number.

Although the initial impression of Yawn is that of a barrage of melodic noise (Ryder-Jones’ voice is low in the mix, which adds to the slightly disorientating tone), there are some lovely moments of light too. The acoustic fingerpicking of Recover makes for a beautiful change of pace, while And Then There’s You and especially standout track Don’t Be Scared I Love You are blessed with absolutely mighty choruses that linger in the mind for weeks.

The downbeat tone may put some people off, and with the average track lasting a good five or six minutes, it’s true that some degree of patience may be required to get the most out of Yawn. For those willing to invest that patience though, the rewards are vast: Yawn demonstrates just how well Ryder-Jones is evolving as a songwriter.