by David Welsh
published: 2 May 2011 in Album Reviews
Tweet 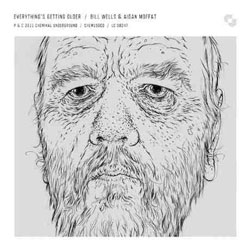 It was only a matter of time before serial Scottish collaborators Bill Wells and Aidan Moffat ended up on the same billing; they’ve moved in similar circles – The Pastels, Maher Shalal Hash Baz and Future Pilot A.K.A. for the former, Arab Strap, Mogwai and The Sick Anchors for the latter – and both have crossed paths with former Belle & Sebastianer Isobel Campbell.

It’s a sense of inevitability that continues into Everything’s Getting Older, an LP that slots its creators’ established modes – Wells’ experimental jazz heritage and Moffat’s brutal realism, lyrically and vocally – into a cohesive whole that is at once leftfield and grim; an audio Trainspotting with artistic flourishes.

While such a proposition may sound the death knell for the interest pop-oriented tastes, there are moments of candid beauty born of the pairing. Let’s Stop Here, following on from tender instrumental opener Tasogare, recounts a stolen moment of sensuality over the barest of sombre jazz backings; Cages rails against the ennui of modernity like a Mark Renton rant, and thrills accordingly.

There are moments, indeed, when Wells and Moffat seem to play up to expectations of their sound but still manage to surprise. The marvelously entitled Ballad Of The Bastard revels in its own misery like a Tom Waits monologue, its opening lines a statement of maudlin intent: “I crushed your heart in my bloody fists / When I did the honest thing and told you of my trysts / Well, you demanded truth / That’s exactly what you got.”

Such toxic levels of weariness, however, tend to win out over Wells’ contemplative compositions. Moffat’s spoken word soliloquy in The Copper Top, an impressively poetic work, relates the album’s main themes – alcohol, mortality, misery – with the sort of restrained melancholy one is not advised to consume exclusively.

Departures from the mode, though every bit as cynically world-weary in a lyrical sense, gain a new sense of momentum having shed soft stylings. Wells instils Glasgow Jubilee with a crashing heartbeat that, in turn, lends Moffat’s outpourings real heat: at this turn he delivers a seething warts n’ all yarn of lust, betrayal and hopelessness.

There’s also (If You) Keep Me In Your Heart, the track that started it all. Recorded in 2003 and featuring the aforementioned Campbell and former fellow Belle & Sebastian guitarist Stevie Jackson, it’s a punchy, smartly-penned and attention-grabbing number that keeps the album – and the listener – onside with an overdue injection of skewed romance.

But it is also an inaccurate representation of the Everything’s Getting Older as a single entity; an album that, in efforts like Dinner Time, is far more akin to Joy Kicks Darkness-style beat poetry crossover projects.

Moffat, in fact, seems far more potent when he abandons his pseudo-singing voice in favour of spoken word; an occurrence that lends strength to Wells’ contributions, and an approach that genuinely sets the LP apart. It’s neither an easy nor a joyful listen, but tolerate the unrelenting gloom and it is never less than absorbing.