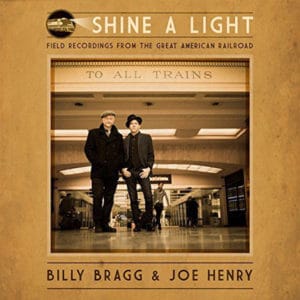 Rejoice, trainspotters! Those silver black phantom bikes and Deadhead-stickered Cadillacs can be left to rust: there’s no vehicle whose wheels rumble through the history of popular music quite as loudly as the train.

Billy Bragg and the American singer-songwriter and producer Joe Henry certainly knew this when, guitars in hand, they boarded the Texas Eagle for a four-day, 2,700 mile rail odyssey in March this year, travelling from Chicago to Los Angeles. They stopped along the way to record a selection of railroad songs, in waiting rooms, ticket halls and at trackside, and the results – clatter, chatter and snatches of birdsong included – are collected here.

The album opens with a steady, call-and-response version of Rock Island Line – which in the hands of Lonnie Donegan kick-started the British skiffle boom, inspiring a young John Lennon among others, making a pretty convincing case that without these railroad songs, the shape of pop would look very different indeed.

The song was popularised decades before, though, by Lead Belly, who appears a few times down the tracklist: there’s The Midnight Special, a 1920s prison song whose train shines a light through the bars, and In The Pines, a sweeter, but no less haunting take on the same song given a new audience by Nirvana as Where Did You Sleep Last Night?, and one of the oldest songs here, dating back to the 1870s.

After the Mermaid Avenue project, setting unfinished Woody Guthrie songs to music by Wilco, and 2013’s Tooth & Nail – produced by Henry – it’s not surprising to hear Bragg steeped in Americana. But despite being American railroad songs, there are themes throughout which make them a natural fit for him.

The heartbreaking The L&N Don’t Stop Here Anymore, played on the staircase at Chicago Union, talks about the closure of the mines which ended the Louisville & Nashville Railroad’s service to a Kentucky coal mining town. Or there’s John Henry and Railroad Bill, one a hero of the labour movement – the man who took on the steam hammer and won – and the other an outlaw seen by some as the Alabama Robin Hood. And for Bragg the romantic, some of whose finest songs are love songs, there’s John Hartford‘s Gentle On My Mind, whose itinerant central figure is echoed in Goebel Reeves‘ Hobo’s Lullaby, Guthrie’s favourite song.

Always impassioned, an amiable blunt instrument – “in a perfect world, we’d all sing in tune”, according to 1988’s Waiting For The Great Leap Forwards – latterly, Bragg’s voice has deepened, softened perhaps, becoming richer and warmer, with a transatlantic accent here which suits the material but isn’t so pronounced as to sound odd coming from the throat which bellowed A New England.

His companion – despite having released 13 studio albums and produced many more – is a bit of an unknown quantity in the UK. In places here, though, Henry’s superb: a voice with roots firmly in American music history, with the perfect ‘yodel break’ for Hank Williams‘ Lonesome Whistle, recorded in the pair’s sleeping berth, and elsewhere an ideal harmonic foil for Bragg, notably on the Carter Family‘s Railroading On The Great Divide.

Necessarily simple, given the way the album was recorded, the arrangements too –  the pair’s guitars locked tightly together, with voices closely intertwined, designed to make as loud and resonant a sound as possible with the most rudimentary of setups – evoke a time when you’d get one take, straight to shellac.

These are songs recorded tens, if not hundreds, of times before, and are by no means definitive versions, but in the attempt to capture something of the historical importance of the railroad, Shine A Light’s songs tell their own story; one which will prove excellent company on any similar expeditions, whether across the plains or the 08.16 to Euston.