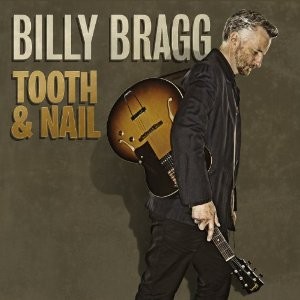 Billy Bragg follows in a long line of singer-songwriters – Bob Dylan, Elvis Costello, Ewan MacColl and (of course) Woody Guthrie to name but four – whose work has been inspired by the tensions and overlaps between the personal and the political. Nothing sums this up better than the fact that, while he is perhaps most commonly viewed as the combative socialist who doggedly opposed the Conservatives throughout the ’80s and ’90s, his most famous lyric remains “I don’t want to change the world, I’m not looking for a new England – I’m just looking for another girl.” It was with a wry humour, then, that he named his previous 2008 studio album Mr Love & Justice.

For all of this duality, however, 2013 seems to demand a polemical response from one of our most famous political artists. The United Kingdom’s current coalition government is its most divisive since Thatcher, dismantling various aspects of the post-war consensus in a manner which even the Iron Lady would have baulked at. This austerity agenda has led to mass protests, strikes, riots and new movements such as Occupy and UK Uncut. Since the financial collapse of 2008, in fact, the sparks of protest and social change have exploded around the globe. It offers fertile ground for Bragg, who once observed that “all the great political music was made at the height of political confrontations” – not least since his 2010 endorsement of the Liberal Democrats ended in bitter disappointment.

What does the Bard of Barking have to say, then, on his first album released in austerity UK? Well… not much, politically at least. Rather unexpectedly, Tooth & Nail is overwhelmingly focused on Bragg’s inner life. Musically it’s largely a continuation of the Americana of Mermaid Avenue, his collaboration with Wilco where they wrote new songs using unheard Guthrie lyrics. Indeed, Bragg adopts an American accent for most of this, underlining a feeling of detachment from the domestic concerns of his homeland. (it comes as no surprise that the album was recorded at the California house of cult artist and producer Joe Henry.)

Certainly it’s notable that the two most explicitly political songs on the album are old ones: I Ain’t Got No Home is a cover of a 1940 Guthrie song which is eerily (if depressingly) appropriate for today with its musings about how the “rich man took my home and drove me from my door” and mention of “the banker’s store”; There Will Be A Reckoning, meanwhile, is lifted from Bragg’s 2010 semi-musical Pressure Drop and is easily the most strident song here, aiming its ire at “the peddlers of hate” and “the politicians who left us to this fate”.

On the whole, however, Tooth & Nail feels like a weary retreat from the political. The opening January Song climaxes with the line “this is how the end begins” but the gentle and sparse backing makes this sound more like an exhausted sigh than a furious warning. No One Knows Nothing Any More finds Bragg pleading for us to “break it down and start again” and wondering “what if our ancestors had stayed up in the trees?” This ennui is made explicit in the tender Goodbye, Goodbye where he sings “the bells have all been rung, the songs have all been sung” as he bids farewell to “all of my friends”.

In this context a sweetly romantic song like Handyman Blues, a quotidian tale where Bragg contrasts his impractical DIY skills with his talent for poetry, can’t help but take on the sense of someone withdrawing from the world and finding solace in his personal life. This is furthered on perhaps the album’s most compelling song, the gorgeously lilting Your Name On My Tongue, where the name of Bragg’s object of affection is “hanging like surrender” in his mouth. This intimate love is made general on Do Unto Others, a simple and amiable ode to how the proverb of the title remains the “greatest commandment of all”. Yet even this is undercut by the observation that there are “too many people looking after number one”. The album’s one pure moment of optimism comes at its close in the form of another song lifted from Pressure Drop, Tomorrow’s Going To Be A Better Day. It’s a declaration that better days will come, complete with carefree whistling, yet it seems lackadaisical after the listlessness which so dominates the preceding songs.

Tooth & Nail is, then, a curious album. While only touching on political concerns in an overwhelmingly general sense, its mood and tone seem almost individualistic and anti-political. It features some undeniably strong songs but is lacking a vitality which would make it a convincing listen. Nonetheless, it’s fascinating in its own way – Bragg has previously spoken of the “melancholy mood” of the British people in the face of austerity and, if he was aiming to capture that, he goes some way to succeeding here.