Billy Jenkins – I Am A Man From Lewisham 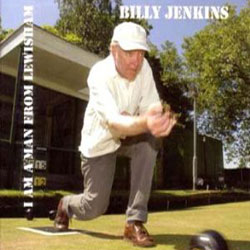 Bromley-born Billy Jenkins is the national treasure the nation’s yet to hear of, one of those oft-overlooked greats of music and, in his mid-50s, akin to a character out of an indie sitcom set in an obscure town. Lewisham, possibly. After a hiatus due to “personal, artistic and economical complexities”, the blues guitarist and bandleader returns with his umpteenth album (we lost count at thirtysomething). In a landscape of consumerist music and trendy-for-a-minute three-hit wonders, I Am A Man From Lewisham adds new meaning to defying convention.

The blues both debuts and ends the album. A Muddy Waters feel mingles with jazz on the opening title track. The cross-genre experimentations develop with each track thereafter, running the gamut from blues, rockabilly and jazz to abstract improvisations of instrumental mishmash – his roots may be in south London, but there’s some South Side Chicago in there somewhere too. This, after all, is a man who once took a bunch of jazz musicians to a motorcycle race to teach them the beneficial risks of improvising.

It is charming to hear a bunch of musicians jamming together instead of sitting in a studio, manicuring every bit of sound. Instead, Jenkins is big on improv, which forms the basis of his music. Or is cleverly arranged to sound like it does.

On (Catford) Broadway plays with abstract jazz, the notes flying all over the place, but there is a strange consistency and a beauty to the surreal chaos, particularly Gail Brand’s trombone and Nathaniel Facey’s saxophone detangling the web together. The fantastically titled Francis Drake Bowling Club could be the soundtrack of a silent Chaplin movie. There is humour and satire throughout Jenkins’ music, but this is rather brilliant. The violin sets the tone of this instrumental track, masterfully played by Blues Collective member Dylan Bates.

Deptford Market is less experimental in form, sporting a more “classical” approach, yet it is one of the more musically diverse tracks. Jazz, blues and rock intersect at every junction. Jenkins is a heck of a guitar player, creating rocky blues that loudly beckons the other instruments.

Way before Mike Skinner hit The Streets with his urban tales, Billy Jenkins was already singing about the Bromley and southeast London streets. Church Of The Ford Transit Mini Bus is a ride across London town, seesawing between the colourful scenery that his music paints in our minds. The uptempo Clock Tower Of Power resembles a New Orleans brass band offering salvation. A full choir asks you to Throw Them Blues In The Recycling Bin, while the closing track is an epic blues number replete with a choir and Jenkins’ raspy, Muddyish voice.

At the heart of it all lies an honesty in Billy Jenkins’ music, a joie de vivre and a whimsical approach that makes him seem such an idiosyncratic find. Let’s hope I Am A Man From Lewisham solves those “economical” worries for him, at least awhile.