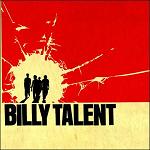 And so the emo-core phenomenon continues, aided by these four young, good-looking, but angst-ridden teenagers from Toronto. At least I hopethey’re teenagers – much older than that and they should be consulting theirphysicians for a hormone imbalance.

If you need a description more specific than emo-core, think GoodCharlotte without the arch humour or Linkin Park without the rapping andyou’ll have a fairly good idea of what to expect from Billy Talent.

The music is, of course, heavy and riff-laden with a pleasingly deft touchemployed by be-quiffed lead guitarist Ian D’Sa which is reminiscent of thevery marvellous At The Drive-In (RIP). However, as soon as the vocals kickin, it all becomes a bit laboured. There’s no doubt that frontman BenjaminKowalewicz can howl like the best of them and when there’s a good chorussuch as in the single Try Honesty, he carries the hook masterfully. But when not searing his vocal cords, he just sounds like he’s wallowing in asea of self-pity.

The lyrics range from earnestly asserting clinical depression (“I’m sickand I’m twisted/I’m broken you can’t fix it” on River Below) to justsilly: “Everybody needs some sympathy/Santa seemed to miss my chimney”Kowalewicz complains on Line And Sinker. Poor lamb. Perhaps if Santahadn’t been quite so negligent, Ben wouldn’t be quite so angry and couldhave successfully auditioned for the next N*Sync.

Still, it’s worked out pretty well for him; as it is he’s probably gotthousands of black-clad schoolkids moshing away at Billy Talent’s undoubtedly loud,sweaty gigs, punching the air to their admittedly anthemic choruses, andannoying their parents by playing the album too loud in their bedrooms. Acareer of heavy rotation on MTV2 beckons and there can’t be many teenagerockers who wouldn’t give their eye teeth for that.