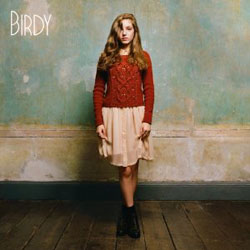 With a voice that defies her tender years, Birdy, aka Jasmine Van den Bogaerde, has found herself very quickly touted as one of the brightest up-and-coming talents in the UK.

The singer/songwriter was signed up to 14th Floor at the age of 12 after winning UK talent contest Open Mic UK, overcoming 10,000 other entrants. The 15-year-old’s cover of Bon Iver’s Skinny Love was chosen by Radio 1’s Fearne Cotton as her Record Of The Week, and Birdy hasn’t looked back since.

Birdy’s self-titled debut album features the youngster’s interpretations of 10 tracks by other artists, plus one self-penned song. Whilst from the outside this seems like a lazy and hurried publicity stunt, it’s worth considering that the covers are not obvious song choices and certainly not destined for inevitable chart success. Birdy covers a mixture of genres, from a wide range of artists, including James Taylor, The National and Phoenix, reworking their songs in a style befitting her own unique talent.

Take her cover of Bon Iver’s Skinny Love. The original was both heartbreakingly gorgeous and a rousing monster of a tune. For Birdy’s reworking, the acoustic guitar is gone – replaced instead by piano – and it is reduced to a slow, mournful ballad. It is one of the least drastic interpretations on the album, yet Birdy makes it entirely her own through the sparse arrangement and her breathtaking vocals. Her third single, a cover of Cherry Ghost‘s People Help The People, is more of the same. The focus is, once again, on the youngster’s vocals and the piano, removing the atmospheric guitars that were present in the original. Birdy’s version is arguably better than the original this time, with her voice showing the maturity and power of Adele.

The album’s pivotal moments, though, are the covers of White Winter Hymnal, Young Blood and Shelter. The originals are all very distinctive, covering vastly different genres. White Winter Hymnal, originally written and performed by American folk band, the Fleet Foxes, doesn’t quite work in the restrained, atmospheric surroundings of Birdy’s album. It’s nice, but without the vocal layering it lacks the euphoric, summer-glow of the original. The Naked And Famous’s vibrant and colourful Young Blood was one of the songs of the summer. Here, it sounds bland and wishy-washy, with the synths receding into the background, in favour of the sporadic piano. However, Birdy’s cover of The xx’s Shelter – her second single – is where things turn around, with a haunting and melancholic performance, aching with beauty. It is not necessarily better than the original, just different.

While Birdy’s debut album consists mainly of covers, she is capable of writing her own material. A prestigious talent from a very early age, she learnt to play piano at just six and began writing her own songs the following year. Without A Word is the one self-penned track that makes it on to her debut, and it offers a glimpse of greater things to come. Like the rest of the album, the centrepiece of the song is Birdy’s delicate, yet worldly vocals that soar alongside the harmonious piano. It is one of the album’s standout songs, alongside the three singles and her wonderful take on The Postal Service’s The District Sleeps Alone Tonight.

Birdy’s eponymous debut album doesn’t actually reveal much about the 15-year-old that we didn’t already know. Like her cover of Skinny Love, it further demonstrates her stunning vocal ability, whilst also proving her to be a future queen of the minimalist, piano-led cover. The album itself – whilst impressive in its seamless cohesion – does become rather formulaic in Birdy’s treatment of the covers, and therefore suffers from a distinct lack of variety. However, there is no doubt that Birdy will use this debut album as a stepping stone for bigger and better things. With renowned producers already falling at her feet – including James Ford (Arctic Monkeys, Florence And The Machine) and Rick Costey (Muse) – Birdy is already being prepared for a big future.