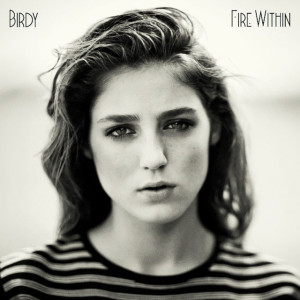 It’s almost two years since fresh-faced Jasmine van den Bogaerde, aka Birdy, released her self-titled debut album. The record, which was almost completely made up of covers, was essentially sold on the fact that the then 15-year-old had a voice that defied her age, with the cover art showing a picture of Birdy looking all innocent and childlike. Yet while the voice remains integral to second album, Fire Within, much has changed since Birdy first burst onto the scene.

The first and most obvious difference between her debut and Fire Within is that the latter is made up of completely original material, with Birdy either writing or co-writing every song. It’s a significant step forward from taking obscure, but brilliant, songs like Bon Iver’s Skinny Love and putting her own spin on them. Then there’s the brooding, melancholic cover art for Fire Within, which instantly screams coming-of-age album.

However, most importantly, Fire Within marks the progression of Birdy as a singer-songwriter in the two years that have passed, with the promise shown in Without A Word – the only original song on her debut – becoming fully realised. Album opener Wings is an impressive and apt choice to kick things off, with the song’s anthemic chorus almost Coldplay-esque, as she sings: “Oh lights go down/ In the moment we’re lost and found/ I just want to be by your side.”

It’s a soaring and powerful ballad that shows a different side from some of the delicate and rather formulaic covers that found their way onto Birdy’s debut. While everything was very stripped back on her first LP, with many of the songs reduced to Birdy’s emotive vocal and piano playing, Fire Within has much more going on – and it benefits greatly from it. Take Light Me Up, which is an upbeat, punchy number, complete with a rousing, guitar-led chorus.

Understandably, Birdy’s voice has also developed during her time away, but its maturer tone retains the same angelic, beauty that made her version of Skinny Love so popular, as demonstrated on the sweeping Words As Weapons. It’s also the focal point on Strange Birds, where she is really given an opportunity to show her incredible range, as she sings: “You’ve always loved the strange birds/ Now I want to fly into your world/ I want to be heard.”

Other highlights include the infectious Maybe, with its simple acoustic melody and wondering beat, and the captivating, slow-burning penultimate track Standing In The Way of the Light, where Birdy really gets a chance to flex her songwriting muscles. Starting off with just a sparse, faint piano melody and her stunning vocal, more layers are gradually added to the song as it continues, before it reaches a towering climax.

While there’s no doubt that Fire Within is a positive progression for Birdy, it is not without its faults. On occasions she does slip back into the formulaic territory that encompassed many of the covers on her debut, with songs like No Angel and All You Never Say both falling a bit flat. The same could also be said of Heart Of Gold, but considering it is her first full record of original material, Fire Within is a confident and assured work.

With similar English singer-songwriters such as Gabrielle Aplin and Lucy Rose both releasing well-received debut albums recently, there was a lot of pressure on the teenager to deliver with her new LP – especially considering the amount of time and effort already invested in her career. For the most part, Birdy lives up to the expectation, with Fire Within consolidating her talent and making sure that no one forgets her in a hurry.