Bis – Music For A Stranger World 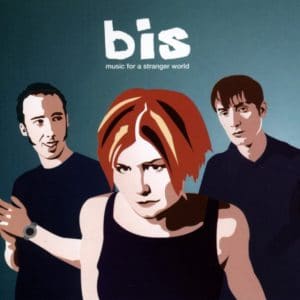 Remember the 1980s? A different century, so they were. The bands at the top of the charts included the likes of Spandau Ballet, Duran Duran, Human League, Thompson Twins and Heaven 17.

Fast forward to the Year 2000. The same keyboards are still in use, as are questionable vocal effects gadgets, riotous electronica and really naff percussion grooves. A band called Bis have picked up music where Duran Duran left it with Wild Boys and A View To A Kill and, with their mini album Music For A Stranger World as a prelude for a full-length album later in the year), Bis achieve the effect of sounding rather like Human League reborn.

The band’s chords sound like they want to thrust the pop element of electronica to the fore, and Steven, the main man behind it all, is delighted with the result. “Music For A Stranger World is the first self-produced work we have ever released, partly to prove we can do it,” he explains. “We are quite happy to take full responsibility for the sound of our records, and the forthcoming full-length record will be the culmination of our work this year.”

If you fancy a night of unashamed worship of New Romanticism mixed with Electronica, go see Bis. You could do worse than buy the album too.