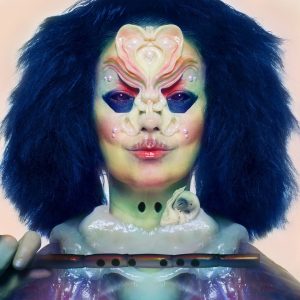 After the storm, comes the calm. The last time we heard from Björk was when she released her most personal, heartfelt album to date, the break-up opus Vulnicura. It was an album that addressed the deterioration of her relationship with artist Matthew Barney, and mood-wise it flitted all over the place: addressing the usual maelstrom of emotions that comes with a break up – anger, sadness, recrimination and acceptance.

Utopia is, sonically at least, a much calmer affair. The prevailing mood is almost pastoral with flutes, harps and a whole load of birdsong added to Björk’s trademark synths and beats. It’s the sort of record which, if you listen to it late at night, in darkness and through a good pair of headphones, can make you feel like you’ve been transported to another planet.

Yet despite the seemingly calm atmosphere, Utopia is that typical sort of Björk album where all sorts of things seem to be happening at once. Every time you listen to it, something new may delight you (not least in her vocal performance, which is as wonderfully idiosyncratic as ever – even the way she rolls her ‘r’s in The Gate deserves to be classed one of the great musical moments of the year).

Opening track Arisen My Senses is suitably titled – it starts slowly, those birds tweeting away and a few plucks of a harp kicking things off, before building up beautifully and urgently as explosions of colour seem to burst from the speaker. And at the centre of it all is Ms Guðmundsdóttir, singing of the delights of a new relationship, whether it be through mixtapes or something altogether a bit saucier (“legs a little open, once again”).

That euphoria of new love is described again on Blissing Me, a blissful ballad that talks of “two music nerds obsessing…sending each other MP3s” and worries about excessive texting. But Utopia isn’t a particularly saccharine album. Sue Me resurrects the flashes of anger seen on Vulnicura (presumably about the custody battle between Björk and her former partner) and its almost free-form melodic wandering seems almost anxiety-inducing. The beautiful Tabula Rasa, which follows, is a more reflective, if no less determined take on the same subject, a plan for Björk to wipe the memories of her children in order to “not repeating the fuck-ups of the fathers, For us women to rise and not just take it lying”.

Mostly though, Utopia is about moving forward and looking to that brighter tomorrow of the title. Features Creatures is a blissful, almost heavenly, number – featuring a choir of multi-tracked Björks as she sings of spotting someone who goes to the same record shops as her ex and thinking “I am five minutes away from love”. The closing Future Forever is similarly optimistic, with its cry of “imagine a future, and be in it”. The role of the young Venezuelan producer Arca should not be overlooked too – in his previous work with Kanye West and FKA Twigs, he’s created a trademark sound mixing melody with an almost otherworldly harshness. He takes his previous work on Vulnicura and builds on it even further here.

As ever with Björk, this is a far from conventional album. It’s messy, sprawling and in some cases (the 10 minute long Body Memory), you start to wonder if it’ll ever end. And amidst the frequently gorgeous melodies comes a harsh, discordant burst of percussion or distorted synth, as if to banish any idea that this could ever be thought of as background music. If you’re willing to give it your full attention, this is a frequently stunning record. It may often be difficult, but like most hard work, Utopia reaps its own rewards.